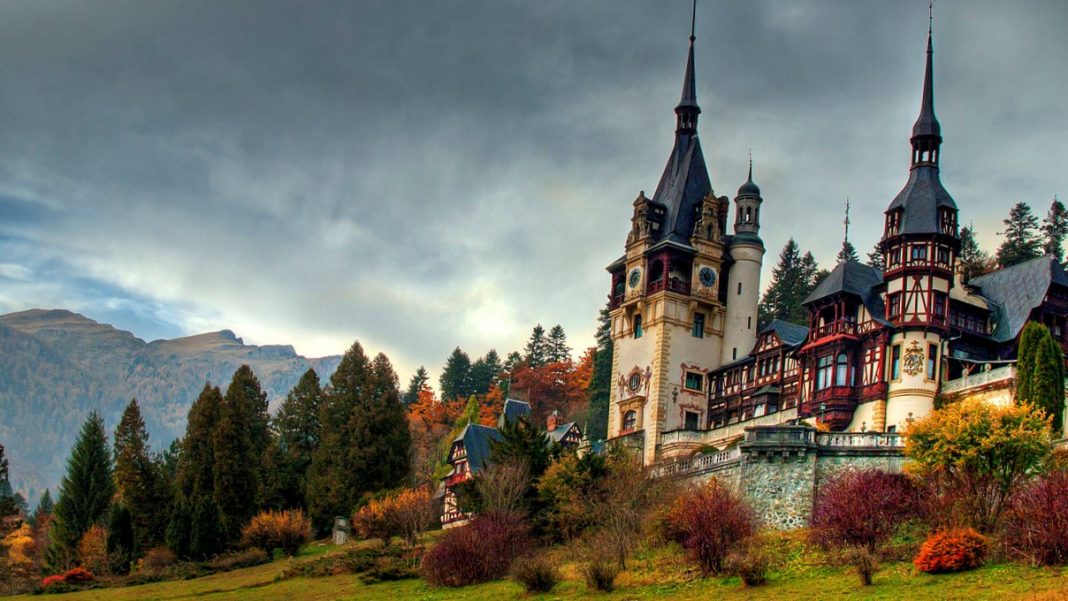 Romania is known for its rich history, lush countryside, and spooky legends. There are many things to see in Romania, but the country is best known for its spectacular castles and fortresses; here are some of the best castles in Romania.

Scattered around the country, perched atop mountains and along the coast of the Black Sea, there are lots of castles to see. Perhaps the most famous region of Romania, is Transylvania. Full of picturesque sights and vibrant towns, it is also home to one of the most famous legends of the region, the myth of Dracula.

Once one of the most important medieval castles in Transylvania, the Deva Fortress is built atop an extinct volcanic cone. The land it sits on, near the city of Deva, has been inhabited since prehistoric times. Deva Fortress was destroyed in the 19th century when a nearby ammunition warehouse blew up. However, it was eventually rebuilt.

One of the most well-known castles in the country, the stunning 19th-century Neo-Renaissance Peleș Castle is full of treasures. Located outside the city of Sinaia, it was built by Carol I to resemble an Alpine villa. There are 160 lavishly decorated rooms filled with priceless art and artefacts. Don’t miss the Florentine, Moorish, Turkish, and French Rooms, all with unique frescos, chandeliers, or stained-glass windows.

Tickets: 30 Lei (€6) for adults, as per the official website

Perhaps the most famous Romanian castle, Bran Castle is often associated with the legend of Dracula. While it actually has little to do with Vlad the Impaler, who inspired the character. Located in the Carpathian Mountains, the 14th-century castle was a border crossing point before becoming a royal residence. Today it serves as a museum.

Tickets: 40 Lei (€8) for adults, as per the official website

The 13th century fortified Râşnov Fortress is set amidst rocky hills and dense forests on a popular trade route between Transylvania and Walachia. Unusually, it was built by the locals themselves as a shelter in times of war. The simple structure is now mostly neglected, but you can still see the stone houses for those taking shelter, a chapel, school, and a 150 meter-deep well, which is said to contain hidden treasure.

Tickets: 10 Lei (€2) for adults, as per the official website

The Sturdza Castle was built in the 19th century by the Sturdza family. Located in the village of Miclăușeni, the Neo-Gothic jewel is adorned with ornate windows, elaborate woodwork, and gothic towers. It was also used as a military garrison by the Russians during World War II, and later as a warehouse and an orphanage. However, after years of restoration, the castle has been returned to its former glory and is open to the public.

Tickets: 10 Lei (€2) for adults, as per the official website

Said to be one of the most beautiful medieval castles in Europe, the 15th century Corvin Castle is located near Hunedoara. The residence of Transylvanian ruler Ioan de Hunedoara, it covers over 7,000 square meters. The sumptuous marble halls, adorned balconies, and drawbridge gives it a fairytale charm.

Tickets: Start at 20 Lei (€4) for adults, as per the official website

Located between the cities of Braşov and Sibiu, the 14th-century Făgăraş Fortress is famous for being the only Romanian fortification never to have been breached. Throughout history it has been used for various purposes; a royal residence, a military prison, an Episcopal residence, and most recently a place of detention for political prisoners of the Communist regime. It remains one of the largest and best preserved feudal castles in Eastern Europe.

Tickets: 15 Lei (€3) for adults, as per the Romanian tourism website

Located in the mountain resort of Busteni, Cantacuzino Castle was completed in 1911 by the architect Gregory Cerchez at the request of Prince George Grigore Cantacuzino. It is surrounded by beautiful gardens, waterfalls, and fountains. The castle’s interiors are just as stunning, featuring marble fireplaces, stained glass windows, and mosaics. It was recently opened to the public in 2010

Tickets: Starts at 30 Lei (€6) for adults, as per the official website

Built over an existing manor house, the Bánffy Castle in the village of Bonţida has been rebuilt several times. It was most recently restored after World War II when it was destroyed by the Nazis due to the owner’s political activities. The current castle combines the previous Renaissance, Baroque, Neoclassical and Neo-gothic elements.

This medieval fortress covers the centre of what is today the centre of the town of Sighişoara. The charming citadel is filled with paved alleyways and beautiful churches, and colourful buildings. It was built by the Transylvanian Saxons in the 12th century. Many old squares and 9 of the 14 towers of the citadel are still standing. It is also the birthplace of Vlad the Impaler.

This now ruined citadel built on a cliff was the actual castle of Vlad the Impaler. After his death, various Wallachian rulers lived here. However, it was ruined by an earthquake in the 19th century.

Also Read: 18 Of The Most Wonderful Castles In Scotland

From imposing fortresses to picturesque palaces, these castles reflect the rich mythology, history and heritage of Romania. While these are some of the best castles in Romania, if we’ve missed any do share them in the comments below.