When I Felt Blessed At Vatican City

No visit to Rome is complete without a visit to the Papal State. So we made the crossover to Vatican City from Rome by walking across the road at the traffic lights! Awesome – couple of steps and you enter a different country. It’s unique and so special. The central dome of St Peter’s or the Basilica Papale di San Pietro dominates the skyline and is the world’s largest Church covering an area of 5.7 acres! 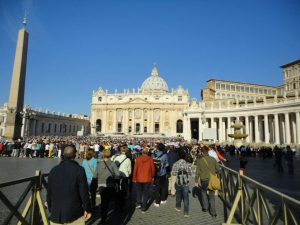 We had an almost ringside view of the pulpit from where the Pope speaks. It was the 3rd day after the Canonisation of two Popes ie.John Paul II and John XXIII so St Peters Square aka Piazza San Pietro was packed to the maximum. Over 70,000 people from different parts of the world. We were there bright and early. They have a good system which ensures no stampedes happen – many huge enclosures with fencing around and a pathway in between. People get into an enclosure and stay there till the Pope’s address is done. Once an enclosure is full, another one is opened. The earlier you get there, closer the enclosures to the front. It doesn’t really matter though because the Pope’o’mobile goes through every single path and you can see the Pope up real close.

Even though we were there early, in the open, we didn’t feel tired or hungry nor needed to go pee! The mood was solemn and the atmosphere begged you to pray! So I prayed for all my friends and vast extended family by name – one brownie point for me up in Heaven! The square is humungous and at the centre is an Egyptian obelisk, erected in 1586. A granite fountain constructed by Bernini in 1675 matches another fountain designed by Carlo Maderno in 1613. The entrance to the basilica as well as the oval area preceding the entrance is framed by huge Tuscan colonnades. The colonnades are what make the piazza. On top of the columns are 3.20 m high statues of various saints created by Bernini. 140 in number, they watch over the crowds and rain down blessings (I hope).

The Pope arrived and his chariot aka the Pope’o’mobile went down each and every path surrounding the enclosures. He came as close as 5 feet near us. Awesome – I nearly fell over the scaffolding in my excitement and also trying to focus my camera on him. He is indeed a people’s Pope. He stopped many times and picked up little kids to bless them. He waved and responded to people who yelled out to him. The feeling cannot be put into words. It’s just the best feeling ever. He has an aura that permeates through your very being. He makes you want to be a better person. I have now seen 2 Popes in my lifetime – the wonderful and warm Pope John Paul II in India in the 80’s and Papa Francis!! Sure makes me feel blessed. 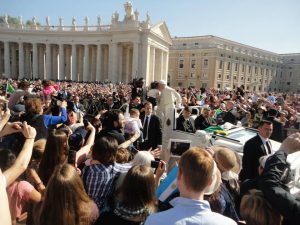 After the Papal address which was translated into many languages ie.Italian, Arabic, French, English, Portuguese, Chinese, Dutch etc etc, we said the Our Father in Latin. To hear a crowd of over 70000 chanting the beloved prayer is an experience of a lifetime.

We headed off then in the direction of the Sistine Chapel. The queue to get in was some 4 kms long! So we got into the Fast track by paying an extra Euro 41 each. That took about an hour but well worth the wait and the cost. Don’t bother converting to Indian Rupees because then you will either have a panic attack or just miss everything you went to see!

The huge tapestries with Renaissance paintings, the murals on the walls, the Sarcophagus’s of various saints, statues, stained glass windows make you ooh and aah but the piece de resistance is the Sistine Chapel which is just breathtaking. Absolute silence is maintained there and some fierce guards ensure you do – in case you wish to suddenly say something profound to your spouse, think again! Learn to speak with your eyes instead, which is what I tried to do and my hubby thought I had something in my eye and was therefore blinking away! Ha!

I sat on a bench and gazed heavenward at Michelangelo’s ceiling for ages – The Creation of Adam, Adam and Eve in the Garden of Eden, the Deluge, the Prophet Jeremiah and the Cumaean Sibyl. Michelangelo painted the Sistine Chapel ceiling taking close to 4 years between the years 1508 and 1512 to complete this amazing masterpiece. Between 1535 and 1541, he painted The Last Judgement which covers the whole altar wall – an absolute delight to gaze on. For me, it was yet another item off my bucket list! Words fail me – it is simply superb and awe inspiring. 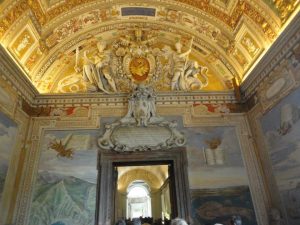 The Sistine Chapel aka Cappella Sistina is a large and renowned chapel of the Apostolic Palace which is the official residence of the Pope in the Vatican City. The chapel serves as a venue for religious and papal activity. The Papal conclave, the process by which a new Pope is selected, is held at the Sistine Chapel. Memories of Dan Brown’s Angels and Demons come rushing to you (if you are a reader)!

A series of frescos depicting the Life of Moses and the Life of Christ by Renaissance painters like Boticelli, Perugino, Pinturicchio, Ghirlandaio and Roselli adorn the side top walls of the Chapel.

We then wandered into St Peter’s Cathedral, a Late Renaissance church. Designed by Donato Bramante, Michelangelo, Carlo Maderno and Lorenzo Bernini – St. Peter’s is the most renowned work of Renaissance architecture. It is the largest church in the world and is considered a very holy site by Catholics.  It also holds the tomb of its namesake Saint Peter – one of the twelve apostles of Jesus and also the first Pope and Bishop of Rome. Saint Peter’s tomb is directly below the altar of the Basilica.

You must see the wonderful altars all around the Basilica. The wondrous Pieta by Michelangelo is found in the North aisle corner. Other altars are those of the Immaculate Conception, Madonna of Succour, Crucifixion of Saint Peter, St Gregory, Archangel Michael. Also a must see is the Chair of Saint Peter, the Baptistery, and the Papal Altar designed by Bernini. I had tears rolling down my cheeks as I knelt in supplication – mostly because I was so overwhelmed with being within those hallowed walls.

The dome at St Peter’s is 448.1 feet, thereby making it the tallest in the world. Another Michelangelo masterpiece. We saw the sarcophagus of Pope John Paul II (my favourite Pope) and numerous others. There are fantastic paintings, statues and altars to be seen. You need more than a day to just soak it all in.

Wandering through St Peter’s Square, you can buy mementos and holy artifacts blessed by the Pope. I consider myself immensely lucky to have been there. If you have a chance, you should go – the history of the place is transfixing.

*All photos apart from the featured image belong to author Mavis Smith.