Just One Day In Miami

What do you do when you only have one day in Miami, one of the most vibrant cities in America? Rising early becomes mandatory in places around a beach. Early in the morning, I took to the south beach area, along the ocean boardwalk, one to watch the sunrise and second to quench the curiosity I got with every city to knowing how people start their day. There were mainly two types of people here, the early joggers and the dishevelled late night club-goers, with me being the rare third kind, taking a quiet walk.

The south beach is rather glamorous looking, but with a typical old school look, as many sit with the newspapers open, rather than the fancy tablets people tend to use today. Coffee shops open quite early, but the tide of joggers gets your adrenaline pumping, wanting to go running with them for a healthy dose of fitness.

As for me, I am not here on holiday, but business, and with only two more days (out of three) to go, I intend to go to town and see what the place is all about. Naturally such short trips never really afford the time to check a site out in its true essence, so I contented myself with wandering around Miami, eating meals, and checking out some local hot spots along the way.

Back to the south beach, which was in 1926 devastated by the most destructive hurricane in American history, which mostly flattened the Miami beach and thus began the Art Deco architecture era. There are numerous buildings made during this period, which stands as one of Miami’s great modern historical landmarks. There are many organised walking tours to view them all, but it’s a simple task to see them by yourself, alone. These retro-styled buildings of the Art Deco era are a world-renowned site and often flocked by tourists and visitors during most of the days. There are many buildings and structures here, and one of them is renowned for the movie Scarface.

Miami had a concentration of substantial Jewish population, which now has mainly diminished. The results of the past are why there exists the Jewish Museum. In recent times this Jewish community according to many here vanished or re-located to north Miami beach-side for many a reason. The Jewish Museum is a decent place to spend some passing time of the day and then move on towards avenues new, namely lunch. 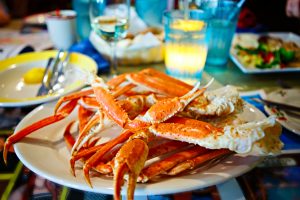 I had a decent budget on me to spend the day, so my first instinct was food, yes spend it on food, but wisely and mainly on quality. So still wandering around the ocean drive area (south beach) an online check revealed a few favourite restaurants like Joe’s Stone Crabs, Poseidon restaurant and A Fish Called Avalon. I went with Avalon! In here along with the pleasing ambience, a visitor could be spoilt for choices in seafood. I wanted a wholesome meal so went scallops and fish portions of red snapper and sea bass. The scallops were cooked very well, while the fish portions were quite huge, making me wonder if there was someone else along with me to eat it as well. That along with their choice of red wine (relatively cheaper one) made the lunch quite a delicious meal.

During the afternoon, as previously suggested by an American colleague to visit the Sea-Aquarium. So I did and got to see an amazing, never before seen the creature called the Manatee (looks like a weird hippo, to be honest), a peace-loving animal, known otherwise as the sea-cow, found in the aquatic grasslands of Florida. There were other exciting things to do such as swimming with the dolphins, which I only watched people do from a distance. Other than that there were other fascinating creatures, along with the version of the crocodile they again find in the grassland areas of Florida.

Moving away from the aquarium, you could take a northwards cab to this place known as Biscayne Boulevard and enjoy the company of art as many galleries flock to this area. This site is also known as Miami’s design district. There are an array of art galleries present here, and quickly visiting them all would drain the afternoon time like no one’s business.

Evenings are for Beer

Post that, and almost evening, meeting few of my own colleagues and few of the American counterparts as well, we headed to the Democratic Republic of Beer. Any place that serves around 500 brews of beer will tend to become an enigmatic presence in one’s life, and so it happened to mine. It’s not just crafted brews, but from all over the world including Ethiopia, Finland, Belgium and Germany among many, many others.

Only during dinner time, along with the same company, did I find out how genuinely diverse Miami is. Little Havana was the latest location in the day’s exploration, predominantly Spanish speaking crowd, and home to the Cuban sandwich. Multiple places are serving these sandwiches, so the choice is yours to pick. The salsa and hip-hop culture pour down your ears from various windows in every corner, so enjoy that with more beer and life seems like so much fun. Miami is also said to be the most LGBT friendly spot in the country.

Finally, you could end up living the Miami nightlife, across the bridge to Miami bridge, where the presence of numerous clubs, makes the Miami nightlife an ecstatic experience. Dance to the tune of much happening music and cocktails. Many here do that all night long, but I returned reasonably early by Miami standards to the comfort of my hotel room.

Heading back, you get the feeling of the relaxed life that Miami lives. A much more peaceful, steady manner compared to the rush I had during my one day in Miami. Although I could only enjoy the place for one whole day, it was still worth an experience. Miami’s typical climate, vibrant beaches and the people in it, no wonder makes it one of America’s top holiday destinations. But there’s definitely more to find out, someday!