Outside Los Angeles – Fun Things to do in Joshua Tree

The typical Welcome to Hollywood sign greets people entering into the dreamy city of Los Angeles (or La La Land as some outsiders like to call it). Los Angeles once may have been a desert, but in today’s world, it’s a real-life paradise, where the weather is excellent for over 300 days a year, where the sun feels like a warm kiss and the air silky cool.

Los Angeles is a colourful paradise, and it’s the people that make it this way. When in the city, you could go round & round and still want your destination, because the city is so goddamn big. Taking bicycles to visit places would rather seem appealing, but unless you want to end up sweaty in the place you plan to visit, then it’s a good adventurous idea on its own.

Diversity! Yes, Diversity is all that defines the place called Los Angeles. Here you’ll find people from all over the world, trying to make their mark and build their fortunes. On record, there are more than 200 languages spoken in the city, and Los Angeles is the home to the many niche religions of the world. Scientologists, Shamans, and Mormons can all be found among many, many others.

They say that Los Angeles is so big, that it could accommodate 12 of US’s major cities. Sure it could, as once you get inside this place, you soon will find yourself doing rounds of places, and still the end of the journey won’t seem any nearer.  After a couple of days chilling within Los Angeles and visiting some of the happening spots, we decided to get out of the place and make the three-hour road trip that leads to Joshua Tree.

Things to do in Joshua Tree National Park

A desert oasis, the Joshua Tree National Park, is an ideal place to be away from the bustling of Los Angeles City, with terrains which have an adventure feel of its own. Joshua Tree is a paradise for climbers, hikers and campers, where various rock climbing routes and miles of trails will create an adrenaline rush, much like these other hiking destinations.

This desert is an ideal camping site for travellers who are here for a short stay, and the star-studded, glittering night sky adds to the beauty of the place. There are numerous things to do in Joshua Tree, most adventurous. So choose the perfect locations around those giant granite rocks, and camp for the night. Rock climbing, hiking and exercising could be one way to look at activities; the others are around Joshua Tree. So we decided to visit these places around, just to see what a desert could offer. 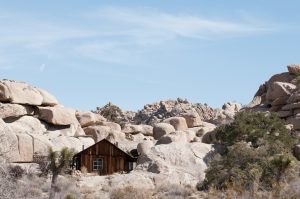 A sect of people, known as Jihn Wranglikans, split off the original group who believed the entire area (quite huge back then) to be under the command of one single god.  For this sect, the letters ‘c’ and ‘o’ seemed derogatory and hence they decided against using them in any form.  Post some intervention from the last recorded Bishopric, Bishop Morongo militarized the site of these cabins and soon after the Wranglikans declared war. This war went on for almost a generation, and in the aftermath, three regions were created, and so were these kabins.

Due to plenty of deaths in war, there was a surplus of women, where the eldest of the house was declared a homesteader (responsible for running the family and providing with food and water). Women were allowed to choose partners among the people and start a family to keep the generations going. With one of these homesteaders did Krblin Jihn fall in love with and they remained together for years to come until she died. It was then that Krblin and the sect started the interpretation of their version of the bible. In this area, Krblin Jihn’s Kabin was later considered as a shrine and hence remains the most well known here. Worth a visit to this place to know about this sect and some more stories post the Civil War.

A crochet obsessed collector named Shari Elf purchased this photo booth turned small museum, and since the early 90s have been making crochet items. Among the eclectic collection are just about every conceivable type of thing, made in a crochet form. Animals like poodles which were her original crochet concept, bears, and unicorns among a lot other. The less identifiable abstract designs here include smiley faces, and some little creations, which end up making this place unbelievable. This site is frequented by many visitors who come to Joshua Tree or camp here. In some circles, the Crochet museum is considered world famous.

This museum is a modern-day version of ‘Art’. Sent on a Ten-acre land, Noah Purifoy’s Outdoor Desert Art Museum showcases modern art, created between 1989 and 2004. This art is different, yet indifferent, as their creation involves ‘junk’ items found around, like burger wrappers, computer screens & keyboards, while most are massive enough for a person to walk in. In some circles, these are considered exemplary pieces of work, and many if not all signify a message towards our environment and nature. This place grew in interest as we went deeper, and spent almost close to two hours, wondering over the art on display.

When we asked around some people, they suggested Bob’s Crystal Cave as the ideal location to spend some time, meditating. Wasn’t on the agenda to meditate, but the Crystal Cave sure creates a craving to do so. When we reached there, the place was decorated with thousands of crystals, with the interior walls covered with insulation foam and wholesome creativity on display. Yes, we did try to meditate for half an hour.

During that time, there was total silence, and only the sound coming from a running water installation felt like we were meditating in an outdoor location, in the woods with the running water resembling a stream or river of some kind. There used to be more to this art form, much of which creator Bob Carr destroyed himself in 2008, because back then the City of Yucca Valley was allegedly planning to take over the entire land under their domain. Despite much of the lost art, the crystal cave still possesses tremendous creative flair and sure is a place to sit and meditate, and find your soul, albeit for in a short time space.

These are few places to fun things to do in Joshua Tree, but the essence of the desert oasis lies in its adventures and camping experience, especially during the night when the sky is lit with stars, the number we can only imagine.