A Quick Guide To Días De Los Muertos: “The Day of The Dead”

Día de Los Muertos is a cheerful, celebratory two- day festival where families come together to remember their deceased family members in a traditional way. The festivities unfold over an explosion of color everywhere and a reaffirmation of indigenous life. Sure, the theme is death but the festival is anything but morbid and gloomy. The festival demonstrates love and respect for deceased family members. Celebrated across Mexico, Día de Los Muertos was recently recognized as a part of the intangible cultural heritage of humanity by UNESCO.

During this Mexico’s indigenous festivity the revelers don funky makeup and costumes, hold parades and parties, sing and dance, and make offerings to lost loved ones.

When is it Celebrated?

Usually, during the end of October and beginning of November, the Día de Muertos (also known as Day of the Dead) is celebrated in Mexico. You can observe this deeply mysterious and meaningful holiday while you visit the country between October 31st and November 2nd every year.

The first day is said to be dedicated to children who have died (called angelitos, “little angels”), while the following day is for the adults.

Why: The Story Behind

Día de Los Muertos is said to have been originated in Mexico. It is based on the belief that spirits return to the world of the living for one day of the year to be with their families. The festival itself dates back to pre-Columbian times but experts believe that was evolved from an Aztec festival celebrating the goddess of the dead, Mictecacihuatl. Later, this shifted onto the modern figure of La Calavera Catrina, a character that was initially born from a political satire drawing and came to symbolize the entire culture of the Day of the Dead. Today the entire celebration is a mash-up pre-Hispanic religious rites and Christian feasts.

Also Read: 2019’s Guide To The Best Destinations For Every Month Of The Year

How is it Celebrated?

While some of the decorations used today are new and the look of this festival evolves over time, the spirit of the holiday has remained more or less the same. Despite popular misconceptions that draw parallels between Día de Los Muertos and Halloween, let’s be clear that this holiday is, far from a fright night. While the two celebrations may coincide, Día de Los Muertos is about honoring your deceased family members. Remember the movie: COCO (2017)?

Taking death as integral to life, during the festival is an occasion for telling funny stories, bonding with family and generally celebrating life.

The center of this exceptionally beautiful festival is an altar which is set in every home and cemeteries for the deceased. These altars are decorated with photos, candles (one for each one), marigold petals and small objects that belonged to deceased family members. This way the spirits are welcomed back the realm of the living. Small altars can sometimes be built directly near the graves instead of inside the homes. If one of the spirits is a child, you might find also find small toys on the altar. Some people also place pillows and blankets out near the altars, to allow the spirits to rest after their long journey from the other world into ours. 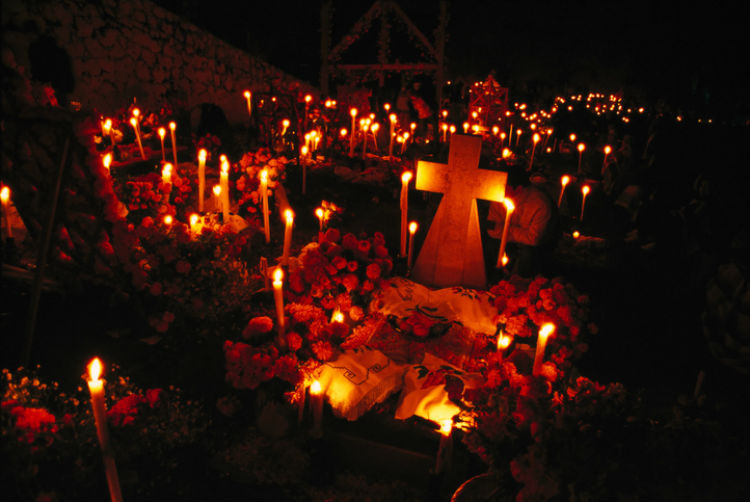 The graves of family members are cleaned and decorated with the idea that the dead return there first. The marigold petals are scattered all along the cemetery alleys to the gravesite so that the spirits will be able to find their way back to their place of rest.  Along with the marigold petals, resinous copal incense is lit that purifies the area.  In some communities, it is customary to spend the whole night in the cemetery, and people make a party of it. They have a picnic, play music, talk and drink through the night while spending time in the presence of their deceased friends and family members.

The spirits are greeted with offerings of special foods after their long journey. This is an invite the ancestors to visit their homes and join them for dinner. The traditional food offerings include:

Actually, the way the Day of the Dead is celebrated in Mexico can differ from region to region and even from one town to the next. Each place has its charm and depending on where in Mexico you are, celebrations can even last for up to one week.