India celebrates 26th January as its Republic Day because it was this day in 1930 when the ‘Declaration of Indian Independence’ was passed. While the Constitution was passed on 26 November 1949 in the Constituent Assembly, it was adopted on 26 January 1950 with a democratic government system, when the country became a republic in true sense.  Each year, grand celebrations take place in Delhi. But traditionally the highlight is the Republic Day Parade which features contingents and displays from the Army, Navy, and Air Force along with colourful floats from each of India’s states.

As our Republic Day looms closer, we bring your attention to 8 countries who also celebrate their Republic Day with great pomp and show:

Every year, Pakistan celebrates two important events on 23rd March; the first is the passing of the Lahore Resolution in 1940 by the leaders of the All- India Muslim League, demanding a separate state for Muslims which ultimately led to the formation of Pakistan. The second event was the formal declaration of Pakistan as an Islamic Republic state in 1956. The day is celebrated with a national holiday and traditional celebrations that include a full military parade and the awarding of honours at the Presidential Palace by the President.

Turkey celebrates its Republic Day on October 29 every year as on this day in 1923, the Turkish constitution was finally amended and the country became a republic. This led to a formal dissolution of the Ottoman Empire. Celebrations usually begin from the previous afternoon and schools, government offices etc., remain closed for the day. Commemorative events include performances, traditional processions with flags and musical bands along with firework shows in all the cities of the country.

On October 10th every year, Republic of China (Taiwan) celebrates ‘Taiwan National Day or Double Ten Day’ to commemorate the Wuchang Uprising which is considered as the start of the Chinese revolution and brought about Taiwan’s republic government in 1911. A national holiday in Taiwan, Double Ten Day has an official flag-raising event which is led by the interim President, along with his speech that is addressed to the entire nation. This is followed with a military parade, a marching band as well as followed by a procession of people from different professions. Other activities include traditional dance performances, parades, rallies and the spectacular National Fireworks Display. 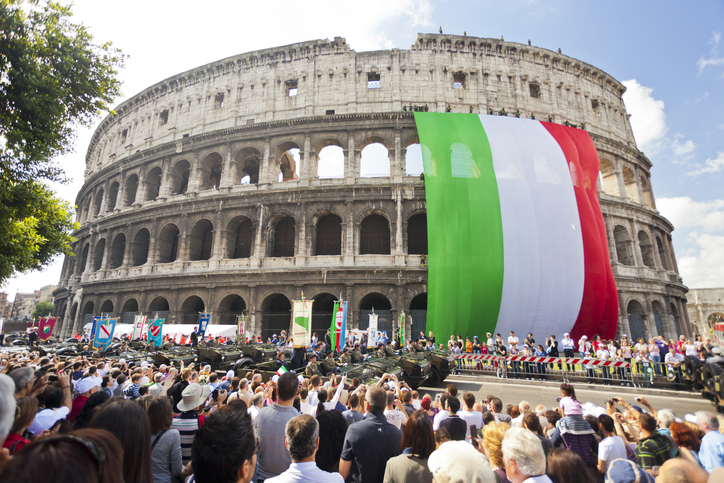 June 2 is an Italian national holiday for its Festival of the Republic or Festa Della Repubblica. It commemorates the referendum of 1946, which led to the official formation of the Republic of Italy after World War II. With this referendum, the Italian population was called to decide what form of government (monarchy or republic) to give to the country after World War and the fall of Fascism. The capital city of Rome celebrates with a huge military parade through the historic centre, with smaller celebrations in many other cities and towns. In the afternoon, several military bands play music in the gardens of the Palazzo del Quirinale, the residence of the Italian President, which will be open to the public on that day.

Every year, Maldives celebrates Republic Day on November 11th to commemorate the abolition of monarchy and establishment of the Republic of the Maldives in 1968. This public holiday is commended across the nation with official discourses, services, parades, speeches, walks and over happy occasions. The main highlight of this celebration is usually vibrant and colourful with marching bands and children wearing their finest while parading out in the streets. As Islam is the official religion of Maldives, the parades often have a significant Arabian flair. Try special Republic Day delicacies such as huni hakuru folhi (a kind of coconut cake), bodibaiy (a super-sweet rice snack) and masroshi (a sort of fish-stuffed pancake).

In Burkina Faso, December 11th every year is celebrated as Proclamation of the Republic. It is a national day for the country during which there are several military parade, parades and other manifestations. The country’s capital city of Ouagadougou is filled up with military trucks cruising the streets and planes flying by.  The national colours red, green and gold are prominently displayed on the day; even flags are hung around the country’s building and shops. The president officially opens the celebrations, and the Burkinabe people join him in celebrating their National Day.

Every year, 18 December is commemorated in the Republic of Niger as Republic Day and is widely celebrated across the country. It is one of the public holidays in the Republic of Niger marking the founding of the republic and creation of the presidency in 1958. This was following the constitutional changes of the French Fifth Republic and the elections of 4 December 1958 that were held across the French colonial possessions. Today, the national day is celebrated with public speeches, official ceremonies, music festivals, sports competitions, art exhibitions etc. The whole country is colourfully dressed with the flag and with the national colours, orange and green. While the main celebrations are held in the capital Niamey, (the largest city of the country) each year, one of the regional capitals is selected as the main centre of celebrations.

So, which Republic Day celebrations have you set your eyes on this year? Let us know in the comments below!