More
Home Topics of Interest Travel Updates Which Are The Top 20 Critically Endangered Animals In The World? 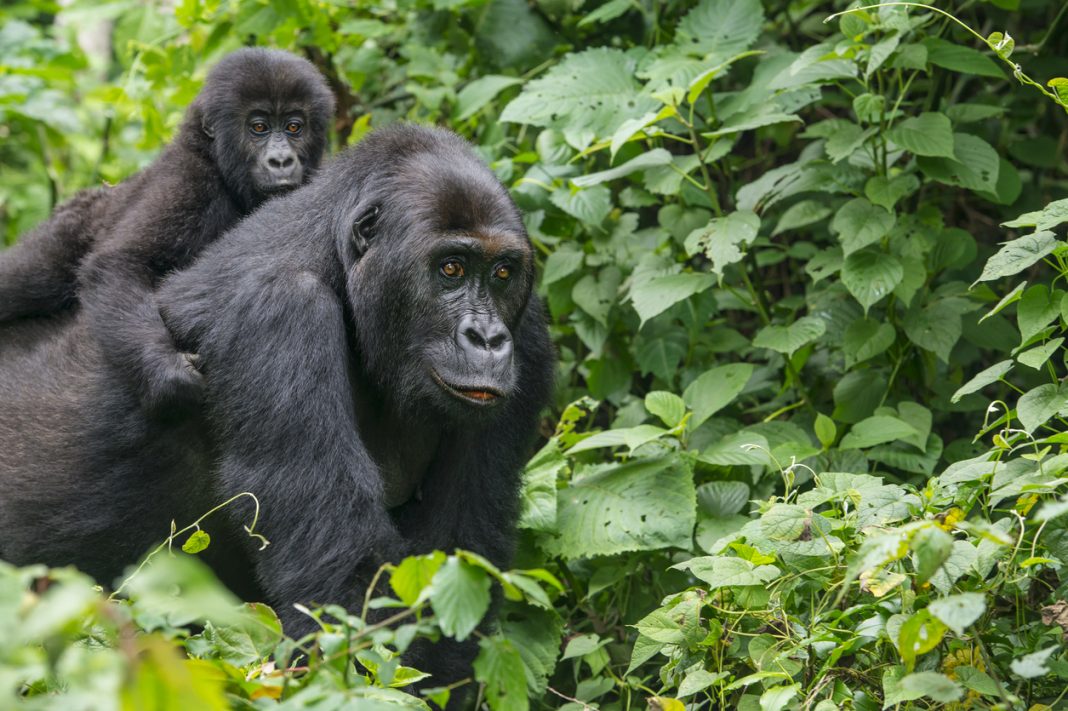 Check Out This List Of Critically Endangered Species Around The World

This large mammal was first discovered in 1992, and was categorically documented only four times in the wild by scientists. Often called the Asian unicorn, this elusive animal is considered critically endangered today, primarily due to hunting. It’s known as one of the rarest large terrestrial mammals on Earth. The saola inhabits wet evergreen or deciduous forests in eastern Indochina, preferring rivers and valleys.

Majorly found in Cameroon, the Central African Republic, the Democratic Republic of Congo and Equatorial Guinea along with large areas in Gabon and the Republic of Congo, the Western lowland gorilla is the most widespread gorilla subspecies. Their slightly smaller size, brown-grey coat and auburn chest distinguish them from other subspecies of gorilla. While they are mostly threatened by disease and poaching, their numbers are also reduced due to loss of forest land, expansion of human settlements, and climate change. The change in climate further threatens the habitat of gorillas, as warm temperatures dry out the region, making them more vulnerable to fire and forest retreat.

Sometimes also known as four-eyed antelopes due to the huge preorbital glands beneath their eyes resembling spectacles, hirola are found in short-grass, seasonally arid plains between dry acacia bush and coastal forests. They are restricted to an area of approximately 7,600 square kilometres along the border of Kenya and Somalia. The hirola population has declined over 90 per cent (and continuing) since 1980, due to a rinderpest (an infectious viral disease of ruminants, especially cattle) epidemic, rangeland degradation and predation.

4. One Of The Two Great Apes Native To Asia: Bornean Orangutan

As the name suggests, the Bornean orangutan is endemic to the island of Borneo but is also found in both Malaysian states of Sabah and Sarawak, as well as in four Indonesian provinces of Kalimanthan: North, East, Central and West Kalimantan. They inhabit primary (old-growth forest) and secondary forests (second-growth forest) and move long distances to find fruit-bearing trees. The loss of their habitat has been caused due to human activities such as hunting, unsustainable and often illegal logging, mining, and conversion of forests to agricultural land. Their dwindling numbers have led to them being added to the list of critically endangered animals.

This subspecies of the western gorilla inhabits lowland montane forests (forests on the slopes of mountains) and the rainforests of Cameroon and Nigeria. While physically it does not differ much from the western lowland gorilla, subtle differences are found in the skull and teeth. Due to their low and falling numbers, it was added into the list of critically endangered species in 2016. Its population risks habitat loss due to agriculture, cattle grazing, and the creation of logging roads.

Our list of critically endangered animals in the world cannot be complete without tigers. Members of the big cat family, tigers are globally listed as “Endangered” on the IUCN Red List of Threatened Species. Its subspecies— Malayan and Sumatran (aka known as Sunda tigers)—are listed as “Critically Endangered”. Due to expanding human activity, almost 93 per cent of the world’s tiger population has disappeared. They have diverse habitats, ranging from rainforests, grasslands, savannas and even mangrove swamps.

Also read: Where can you find the biggest cats in the world?

This rare subspecies of leopard is found in southeastern Russia and northeastern China and is currently threatened by shrinking prey tracts and illegal wildlife trade. Due to lack of adequate food sources, their numbers are dwindling. There is constant logging and poaching of roe deer and sika deer, their main food source. They are also known as the Far East leopard, the Manchurian leopard and Korean leopard.

Also known as Grauer’s gorilla, the eastern lowland gorilla is distinguished from other gorillas by its stocky body, large hands and short muzzle. They are endemic to the tropical rainforests of the eastern Democratic Republic of Congo (DRC). An increase in intense human activity has led to habitat destruction and fragmentation, and years of civil unrest in the region has meant that eastern lowland gorillas numbers have declined. Their range of population has decreased from an estimated 13,000 square kilometres to about 7,400 square kilometres today.

According to IUCN, the best guess of the current population of Asian elephants is around 40,000–50,000. Inhabiting 13 countries, their numbers are fast dwindling. Especially the Sumatran elephant that is found in the lush lowland forests of Sumatra—there are only around 2,000 left, due to their shrinking habitat and ivory poachers.

“Orangutan” in Malay means “person of the forest”. This primate is threatened by habitat destruction, poaching, and illegal sale as pets. They are largely found only in Sumatra and Borneo. Known as the gardeners of the forests, orangutans play a vital role in seed dispersal in their habitat. They are in the critically endangered animals list due to human activities such as deforestation, illegal and unsustainable logging.

Rhinoceros, or as commonly abbreviated rhinos, once roamed many places throughout Europe, Asia, and Africa. Today, due to poaching for their distinctive horns, three species of rhinos—black, Javan, and Sumatran—are critically endangered. Sumatran rhinos can be found in inhabited rainforests, swamps, and cloud forests of these Asian countries: India, Bhutan, Bangladesh, Myanmar, Laos, Thailand, Malaysia, Indonesia, and China.

Another subspecies of rhinoceros, black Rhinos are primarily found in four countries: South Africa, Namibia, Zimbabwe and Kenya. Their population began declining in the 20th century at the hands of European hunters and settlers. Even today, their two horns make them lucrative targets for illegal trade and poaching.

13. Most Threatened Of The Five: Javan Rhino

Earlier found throughout northeast India and Southeast Asia, the Javan rhino can now be found only in Ujong Kulon Nature Reserve, located in the furthest southwestern areas of Java. The 58-68 individuals that live only in the park have stabilised, largely because they are guarded by Rhino Protection Units. The biggest threats to their population have been poaching, natural catastrophes, habitat loss, diseases, and potential inbreeding.

Known for their distinctive large and bulbous nose structure, the saiga is another antelope species on the list of critically endangered animals. Usually roaming a remote, often frozen, treeless landscape, it inhabits the harsh conditions of the semi-desert grasslands of Central Asia. Due to increasing hunting (for its horn and meat) and habitat destruction, their numbers have observed a decline of over 80 per cent over the last 10 years. The decline sadly continues.

This mammal is a subspecies of the narrow-ridged finless porpoise which is found only in the Yangtze River. While the decline of this subspecies began in 1984, it was added to the list of critically endangered animals in 2013. Its close cousin, the Baji dolphin was also named functionally extinct due to human activity. Their decline in population reflects the deteriorating state of arguably the world’s most degraded river system.

16. One Of The Most Beautiful Sea Turtles: Hawksbill Turtle

Found mainly throughout the world’s tropical oceans, predominantly in coral reefs, Hawksbill turtles are named for their narrow head and sharp, bird-like beak. They use this beak to reach into cracks and crevices of coral reefs to feed on sponges and other invertebrates growing there. While they are most threatened by wildlife trade, their population is also declining because of the loss of nesting and feeding habitats, excessive egg collection, fishery-related mortality, pollution, and coastal development.

A native of the Saharan desert, wild addax are classified as critically endangered. They are believed to have undergone a decline well exceeding 80 per cent over the past three generations because of unregulated hunting. Previously they were found across northern Africa, but today are only found in the Termit & Tin Toumma National Nature Reserve in Niger, according to the IUCN.

This subspecies of orangutan is the only great ape to be found outside Africa, and the largest arboreal mammal in the world. As the name suggests, it used to inhabit the entire island of Sumatra and further south into Java. But now due to the relentless destruction of Sumatra’s rainforests, it is restricted to remaining patches of rainforest in northern Sumatra, Indonesia.

19. Largest Of The Gazelles: Dama Gazelle

Another native of Sahara, the Dama gazelle is a small member of the antelope family. Geographically, it is found in the countries of African Sahel and the Sahara desert. Today, due to the unmanaged large-scale hunting and habitat loss, their population has declined 80 per cent over 10 years.

Also the world’s smallest cetacean (mammals like the whale, that live in the sea), vaquita are found only in the upper Gulf of California in Mexico. In marine protected areas within this gulf, the vaquitas are often caught and drowned in gillnets used by illegal fishing operations. And therefore with only 10-15 vaquitas remaining, conservative action is now focused on a fully enforced gillnet ban throughout their entire habitat.

The IUCN also conducts a re-assessment on how species are doing over periods of time. If due to conservation efforts by different organisations and individuals around the world, things seem to have improved for a given species—meaning the population has increased, then that species is ‘downlisted’ to a less critical status. On the other hand, species are also ‘uplisted’, an indication that their population is still declining. We need to do our share of work to protect these animals. Start by protecting and conserving the environment. Begin simply by buying sustainable products, cutting back on single-use plastic, and reducing water consumption. There are many more animal species on the critically endangered species list. We have listed just 20. Let us know how you’re conserving the planet in the comments below.