Have you also fallen prey to the recently famous Spanish series called ‘La Casa De Papel’ (in English known as ‘Money Heist’) and are now continuously humming ‘Bella Ciao’? Well, us too! This show has captured hearts all over the world with its action, suspense, and inventive storyline.

What’s interesting is that the show (even with its raging popularity) avoided adapting to the international tastes and in that way retained its cultural identity. The series is the story of the world’s biggest heist, orchestrated by a crime genius to the smallest detail where the heist men (and women) are given code names inspired by cities. We believe the codes were picked according to their characteristic personalities.

As a character, Berlin was a sociopath that hid behind his impeccable manners. He also had an almost pathological need to please others. This affably evil man with his expensive lifestyle brings control in the heist, the same as the city of Berlin’s combo of glamour and grit.

Our punk rock chick is the narrator of this heist but along with that, she is also impulsive. This young and tough character hooks the audience with the same passion as the city she is named after. Being futuristic yet rooted in tradition, the city of Tokyo balances the brash with tranquil gardens and old ways.

Helsinki and Oslo (The Loyal Cousins)

‘The Brutes’, they can be considered as the strength in the group. As declared by Helsinki, they have been together in ‘in war, in peace, in crime, and in prison.’ While both these Nordic cities are not conventional travel destinations, they are filled with magnificent architecture and breath-taking scenery of the surrounding mountains and sea.

Denver (Muscle with a Heart of Gold)

Are you thinking about the laugh too? This character brought to life the trope of a thug with a hair-trigger temper. Just like in the story with his multi-faceted characteristics, Denver city is known for its 300 days of sunshine, a thriving cultural scene, diverse neighbourhoods, and natural beauty.

This former miner who became locksmith (and later used those skills to rob bank vaults and jewellers) was clearly a gentle soul who cared for others. He also made a special bond with Tokyo and was the only one who was reasonable with a good moral compass. The city code picked for him fits him well as this Russian city is one of the coldest cities on earth, but is home to some of the most colourfully unique architecture, green landscapes, and rich history.

Literally the youngest in the group, Rio is playful and naive. Known to be a very skilled hacker, Rio is obviously the tech expert in the group and is shown to have the most empathy with the hostages. The age and nature fall in place with the city code picked for him as the Brazilian city is one of the most populous cities with vibrant colours. It is bound together with the stories related to history and heritage, works of pride and legacy, and, the artful portrayal of culture and tradition.

Put in charge of the quality of the falsifications, Nairobi as a character is ruthless and smart. She is loud and clear about her motives and therefore, one of the few who are future-oriented. Just like the character, Kenya’s capital city is filled with boundless energy. East Africa’s most cosmopolitan city offers great contrasts where race, tribe, and origin all become facets of a unique Nairobi character.

In this group of bandits in La Casa De Papel aka Money Heist, each with a broad range of skillsets and some intriguing character traits, who was your favourite? Let us know in the comments below! 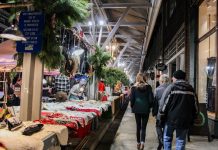