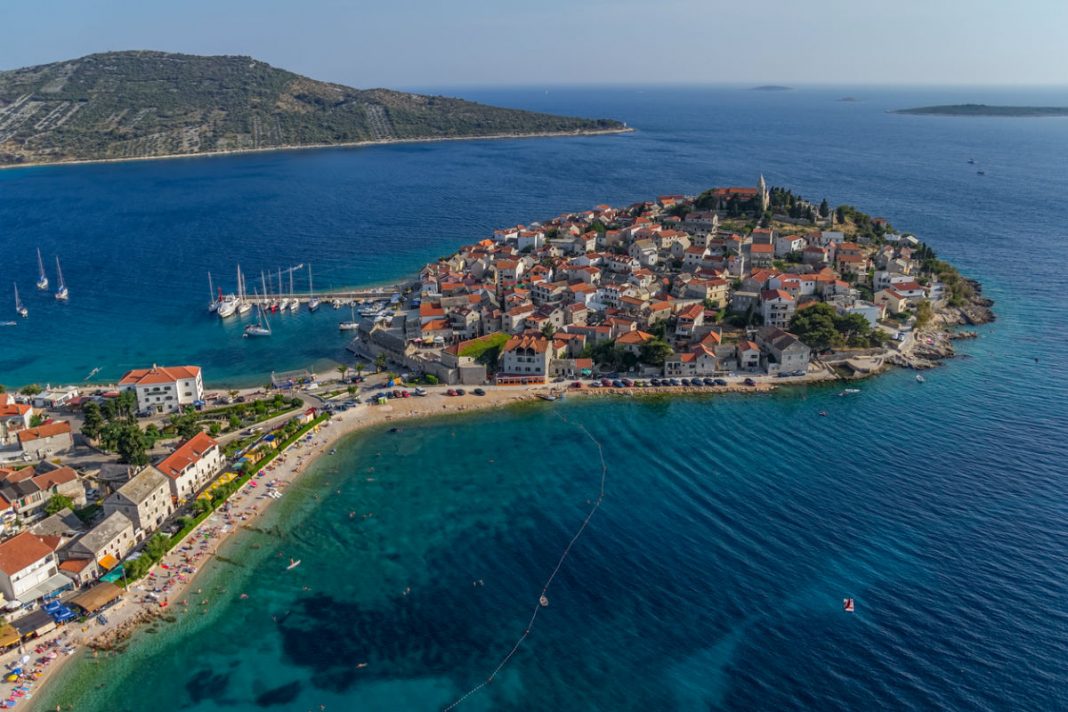 The southern part of Croatia has a small coastal town called Primosten that will enchant you with its charm and its crystal blue sea will leave you breathless. Unwind while drinking a glass of the famous Babic wine, eating a slice of prosciutto and cheese and enjoy one of the loveliest towns along this stretch of coastline.

A part of the Šibenik-Knin County, Primosten is situated between the cities of Šibenik (30 km) and Trogir (30 km). Pretty little Primošten can be found in the central part of the Adriatic coast and surrounded by seven small islets. It occupies what was once an islet just off Adriatic coast and is now connected to the main island by a thin causeway. 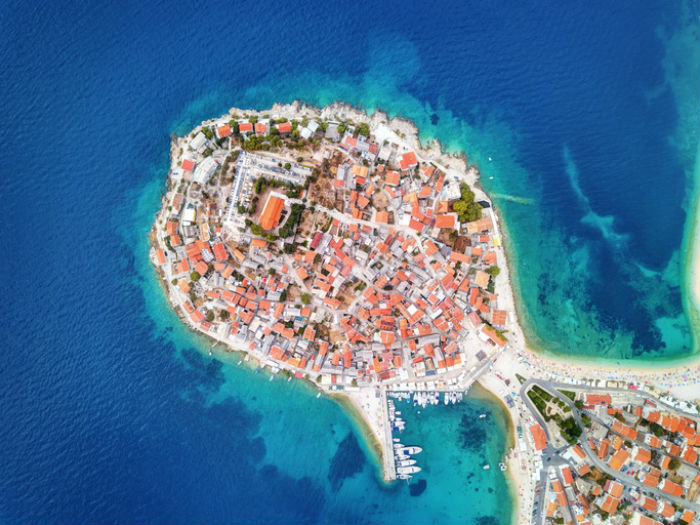 Due to the Turkish threat of the 16th century, the residents of Primošten fortified it built a wooden bridge, which they raised in times of danger. That’s how the town got its name: premošten means bridged over, hence Primošten. When the Turks disappeared, the drawbridge connecting it to the mainland was replaced by a causeway.

Located on the peninsula, this little town kept all its architectural features of a medieval Mediterranean town which is can be seen in the narrow streets and old stone houses in the old part of the town.

While Average temperatures in Primošten vary greatly, the best time to go to Primošten is in the early fall. Temperatures are warm and rain is more common, but accommodations are much cheaper than what you would have paid in summer.  Most people visit Primošten during July, August, and then June, which are the hottest months for the region. As summer is the peak season for this charming town, you can expect to more for your hotel or vacation rental. The whole town comes to life during this time, however, if you do not like the heat and wish to avoid the crowds, the best idea is to visit Primošten in April-May or September. The temperatures are in the mid-70s, a little cooler than the average 85°F you could get during high season.

Also Read: 8 Traditional Croatian Dishes That You Need To Try!

Located in the northeastern bay on the Raduca Peninsula, Velika Raduča is the largest beach in Primošten. This pebbled Beach is centrally located, 250 meters from the town centre and therefore can is easily reached on foot. With natural shade, smooth entry into the blue sea and numerous activities available here, it’s not surprising that Velica Raduca Beach is the favourite among tourists and locals both.

This parish church in Primošten dates back to the 15th century and is known to be the most monumental building here. Located at the highest point in peninsula, the Church of St. George (Crkva Sv. Jurja) was built in Renaissance style but also has a Belltower which was built in the 20th century. Inside you’ll find an altar dedicated to Our Lady of Loretto, which is the patron of the town. Don’t forget to look up at the beautiful ceiling paintings while there!

Our Lady of Loretto statue

Erected recently, the statue of Our Lady of Loretto is a 17-meter monument designed by architect Aron Varga and mosaic artist Milun Garcevic. Placed on its base on Gaj hill overlooking Primošten, this monument is one of the biggest shrines to the Virgin Mary in the world.

Primošten is known for its old and beautiful vineyards which are listed as UNESCO World Heritage Site. These famous vineyards with their distinctive composition of vines, stone and sea have become recognizable in the entire world. They are often called the “stone lace” as they are intertwined with kilometres of dry-stone walls that the field labourers have been building since ancient times.

Old Primošten cemetery on the hilltop

Right next to the Church of St. George, there is an old Primošten cemetery which is considered as the best best place to watch the sunset in Primošten. From here you can see the peninsula with beaches Raduča, nearby islets and even the Šibenik Archipelago on the horizon! While surrounded by sea, you can relax and feel the peace and quiet of this place.

So visit the coastal town of Primošten and do let us know about your experiences in the comments below!