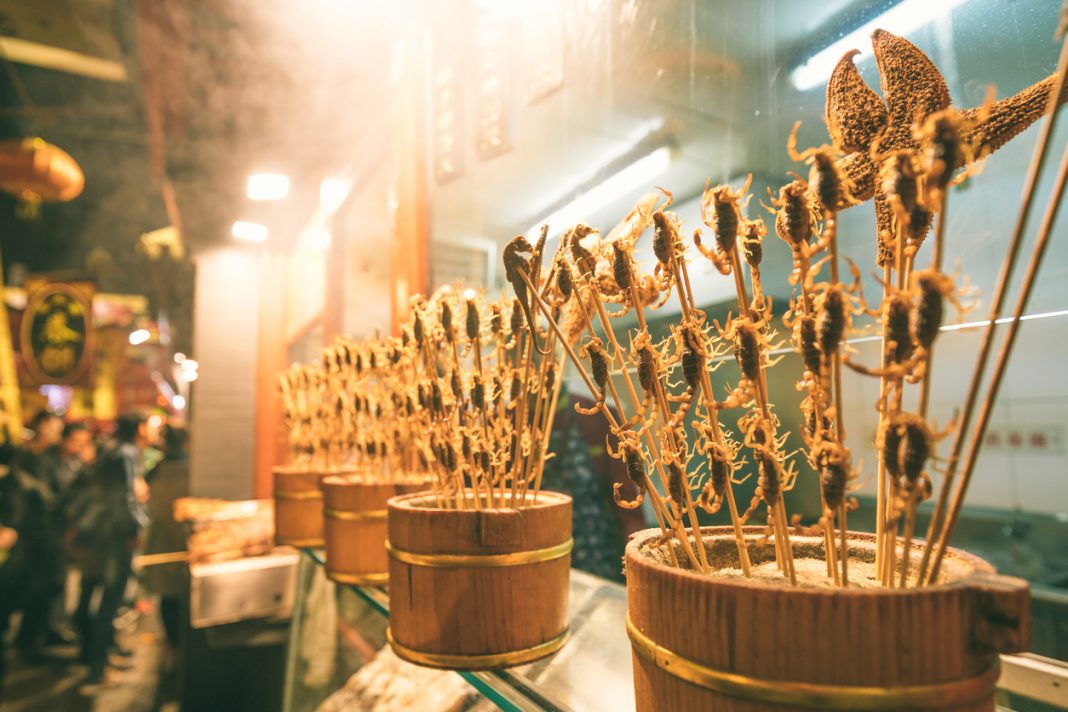 The world is full of weird and wonderful things, so let’s take a little trip around the world and explore some of the weirdest foods we could find. From wasp crackers to rotten eggs, these dishes offer a truly fascinating look at cultures from across the globe. Though perhaps before we start you might want to pause and ask yourself how much you really want to know about these bizarre dishes, and how strong your stomach really is.

Done? So, let’s take a look at 17 of the weirdest foods from around the world.

*Warning: This one’s not for the faint-hearted; some may find these images disturbing.* 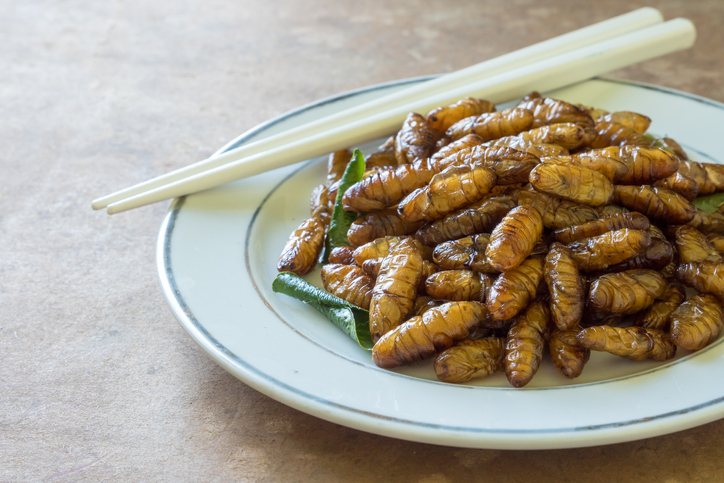 This popular delicacy is found throughout Southeast Asia, but is perhaps most associated with Malaysia. It can be eaten in many forms – sautéed, raw, or steamed – and are usually sold by street vendors.

This Sardinian “Maggot Cheese” is made with sheep milk Pecorino and contains the live larvae of cheese flies (piophila casei) which are added during the cheese fermentation process and digest the fats. It is banned by the EU but can still be found on the black market.

These Japanese biscuits are (as you’ve probably guessed) stuffed with wasps. Digger wasps (which have a mean sting) are dried and incorporated into the cracker mixture. They’re said to taste like slightly acidic raisins.

Chaprah, or red ant chutney, is a crunchy side dish that comes from Chhattisgarh, India. Red ants and their eggs are dried and crushed with spices and salt, creating a dish that has a fiery bite.

This soup is made with deadly cobras (with the fangs removed) that are dismembered and shredded, and then boiled and added to this soup. 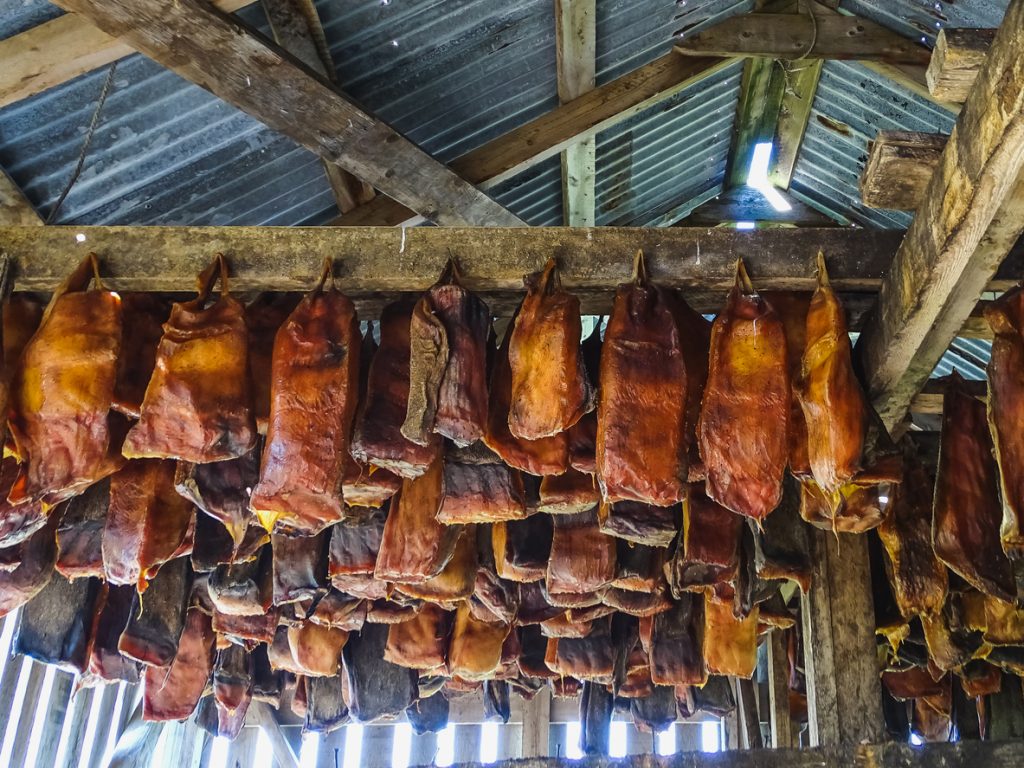 Hákarl, or fermented shark, is said to smell like ammonia and taste like strong cheese. The Greenland shark is poisonous when fresh, so it is buried in a hole to ferment for 6-12 weeks before eating.

Also Read: Traditional Icelandic Dishes You Have To Try When You Visit

No, unfortunately, these eggs aren’t actually a hundred years old, but they are pretty rotten. Also known as pidan, these eggs are preserved in a mixture of clay, ash and quicklime for a few months, until the yolk turns dark green and stinks of sulphur (though apparently it tasted just like a hardboiled egg.

Fried tarantulas are a regional delicacy in Cambodia. Not many people would look at a tarantula and think “tasty,” but this dish became popular during the food shortages under the brutal Khmer Rouge regime. Strangely, it stuck around and can now be found throughout the country. The spiders are marinated in MSG, sugar and salt and then fried with garlic.

Back when every part of the animal was eaten, some adventurous eaters from Canada and northern Alaska began preserving the moose’s long snouts. They’re boiled up with onions and spices, then the hair is removed, and they’re boiling again; finally, they’re sliced and covered with a broth that sets into a jelly.

This seafood delicacy literally means “white children;” it consists of the sperm sacs of fish (usually cod, angler fish or pufferfish) that are eaten raw, steamed, or fried in tempura batter. They’re said to have a sweet custardy taste. 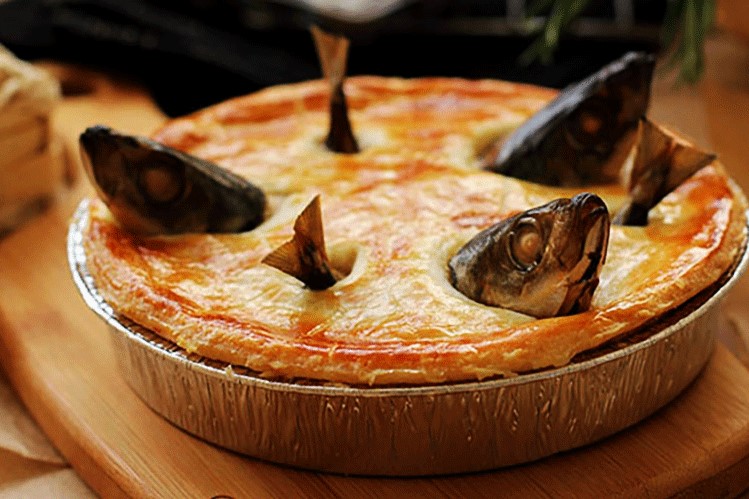 This unusual fish pie has the heads of the fish stick through the crust, like they’re ‘star-gazing’. It dates back to the 16th century from the Cornish village of Mousehole in England. A local legend claims that a fisherman, named Tom Bawcocks, went fishing during a storm to feed the hungry people and made the pie.

Also Read: Cornish Food To Try On Your Next Visit To The UK

Huitlacoche (literally “sleeping excrement”) is created by a fungus known as corn smut that covers normal corn kernels with blue-black spores. It’s said to have a woody, earthy flavour. (Another Mexican delicacy is Escamol, or ‘insect caviar’, that is made from larvae and pupae of ants, harvested from the tequila or mescal plant).

While this dish certainly comes from the Rocky Mountains, there aren’t actually any oysters involved. Also (deceptively) called Cowboy caviar and Prairie oysters, they’re actually bull-calf testicles that have been peeled, flattened, battered and deep-fried. 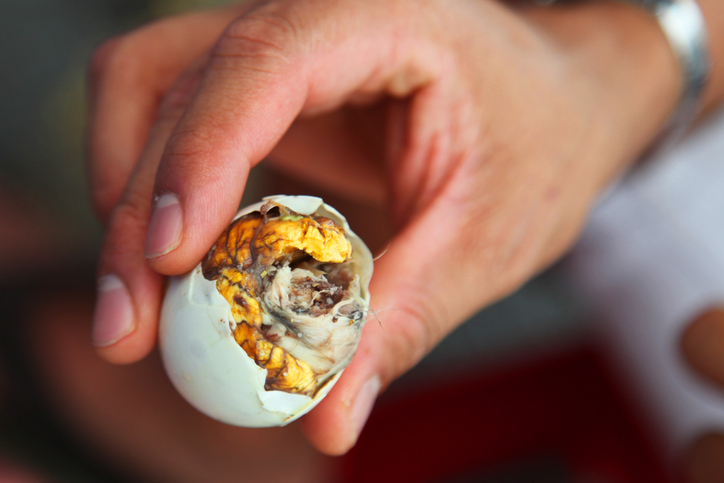 This common Filipino street-food features a fertilized duck embryo boiled alive in the shell. You’re supposed to tap a hole in the top of the shell, slurp on the liquid buts then have the rest with salt, chilli and vinegar (feathers, bones and all). 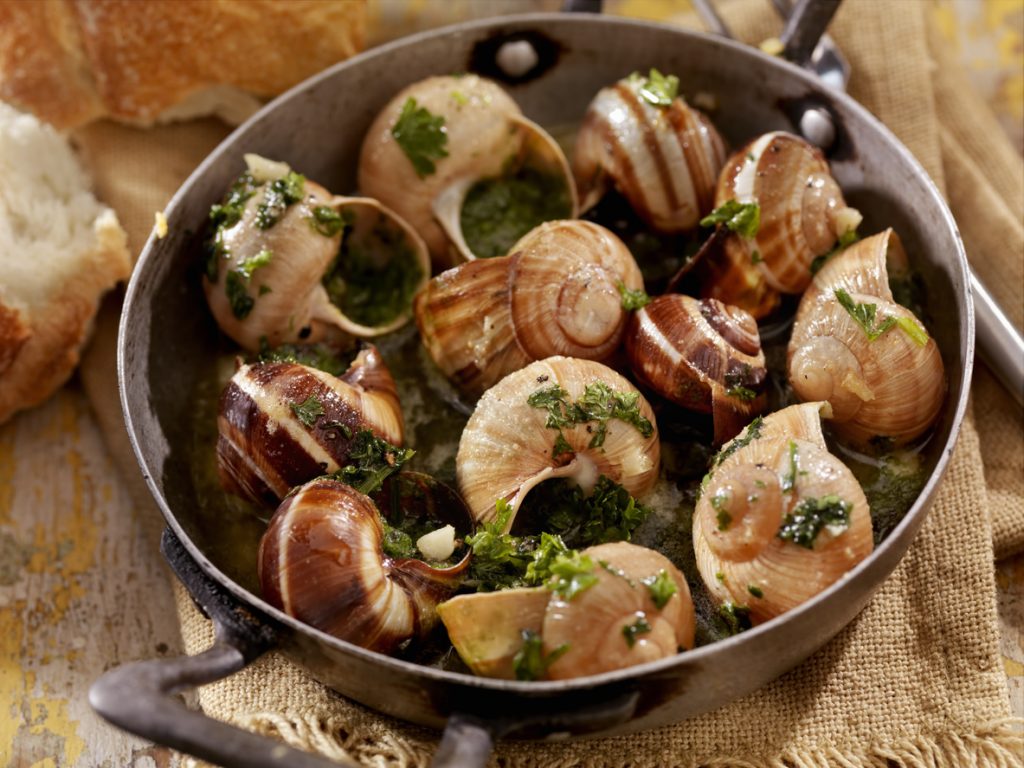 Snails are eaten in many places around the world, but are especially popular in Morocco and France. In Morocco, they are a beloved winter street food, and are cooked in a spiced broth while in France they are removed from their shells, cooked with garlic butter or chicken stock, and then placed back into the shells and served with butter and sauce.

Once considered offal and generally reserved for the poor, uierboord recently saw a resurgence in popularity. The udder of a cow is cooked for hours in a lightly seasoned broth, then fried or baked. It is then flavoured with salt and pepper, sliced and on bread.

While it may look like an oddly shaped grilled corn-on-the-cob, this is actually honeycombs with the small, whitish bee larvae, still housed inside. They are wrapped in waxy green banana leaves and cooked over hot coals creating a juicy, sweet, and nutty snack.

Also Read: The Top 11 Weird Beers From Around The World

It’s fun to read about these strange and weird foods, but a word of caution; if you’re actually planning to try and eat some of these dishes, some of them can be dangerous. But, if you’ve already tried some of the world’s weirdest foods, let us know in the comments below!