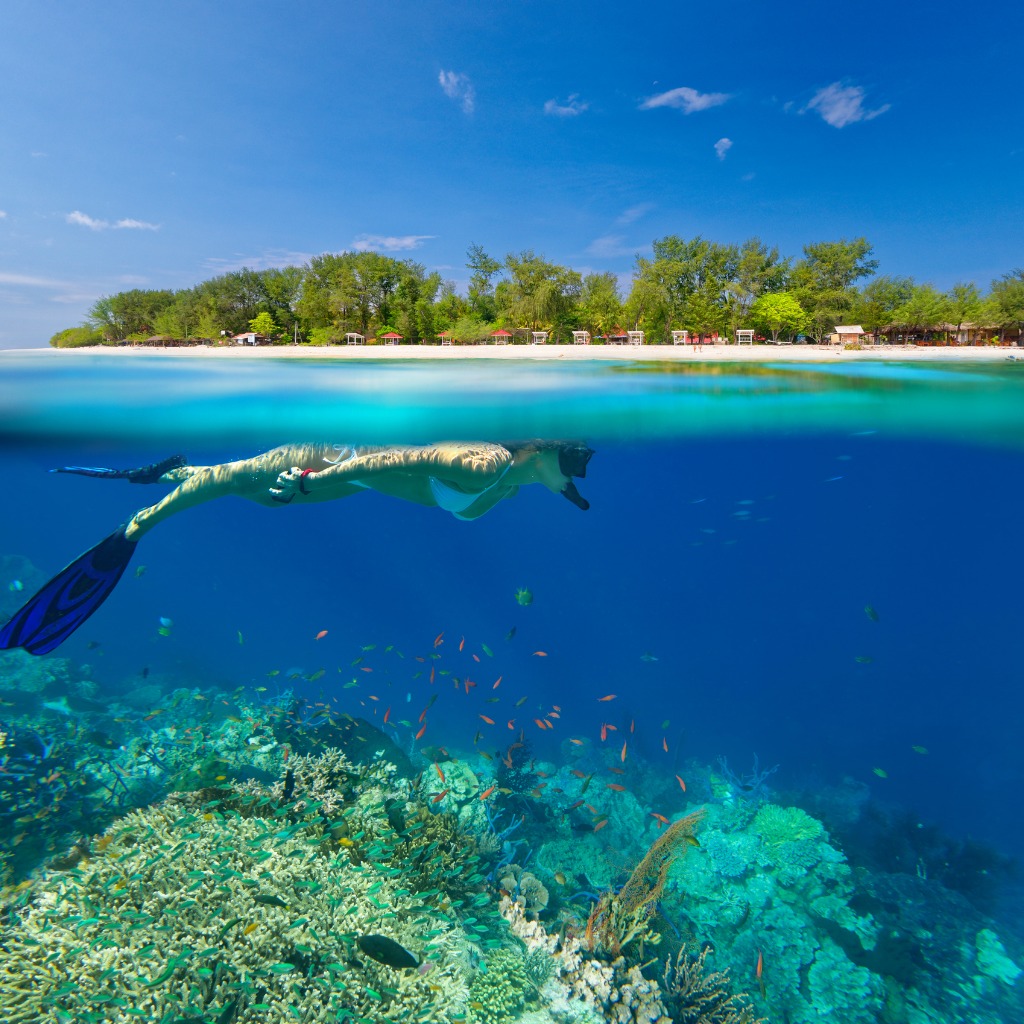 According to the Cambridge dictionary, an island is a piece of land completely surrounded by water. They can be in any type of water body—an ocean, sea, lake or even a river. There are believed to be millions of islands on the surface of this planet. And, while it might be really tough to track all of them, we can at least list down the largest islands in the world. Islands have fascinated most of us for millennia, as they usually invoke a feeling of escape or luxury. With their natural beauty, indigenous flora and fauna, and proximity to bustling cities, these large  islands must feature on your bucket lists. So get adventurous and ready to explore the world’s largest islands with us.

Also Read: 15 Most Beautiful Islands In India That You Must Visit

The largest island in the world, Greenland, is sandwiched between the Atlantic and Arctic  Oceans. This autonomous constituent country within the Danish realm has an arctic to sub-arctic climate, with cool summers and very cold winters. The island is the least densely populated territory in the world, as more than 80 per cent of the land is covered by ice caps and glaciers. The island is known for its magnificent deep fjords, floating icebergs, whale watching, distinct local culture, winter sports and hiking. While the country is part of the North American continent geopolitically, the island forms part of Europe. It attracts tourists and scientists with its magical and stark Arctic beauty.

Also read: Top 6 things to do in Greenland

Located in the Western Pacific Ocean, New Guinea is the world’s second-largest island, after Greenland. It is split almost equally between Papua New Guinea to the east and Indonesia to the west, and is administered by both countries. This island is 1,500 miles long and 400 miles wide, with coastlines on both sides offering excellent diving destinations with near-perfect  weather conditions throughout the year. You will be astounded with the biodiversity found beneath the waves here, colourful arrays of coral and fish. While diving, don’t be surprised by the incredible collection of World War II plane wrecks and shipwrecks waiting to be explored. If you are up for some mountain climbing, try hiking up the highest mountain here, the Oceania, a member of the seven summits Puncak Jaya (Carstensz Pyramid), located just inside the Indonesian border on the island.

This giant rugged island is located in the west mid-Pacific Ocean and comprises three countries, namely Indonesia, Malaysia and Brunei. However, the vast majority, which is approximately 73 per cent, is Indonesian territory. The third-largest island in the world, Borneo in Southeast Asia’s Malay Archipelago is home to one of the oldest rainforests in the world (link to forests article). The island is known for its beaches, and the exotic and rare wildlife in its jungles and surrounding waters. Interestingly, the highest peak in Southeast Asia, Mt Kinabalu, is located in Borneo. Watch out for endangered wild orangutans swinging through the jungle canopy, Irrawaddy dolphins, and saltwater crocodiles lurking in the waters of the South China Sea.

Located on the east coast of Africa, in the Indian Ocean, this huge island nation is fourth on the list of largest islands in the world. This incredibly diverse island was created about 88 million years ago when this land mass separated from the Indian subcontinent. Madagascar is home to thousands of unique species of plants and animals; in fact, 70 per cent of the 250,000 species of animals in Madagascar are not found anywhere else in the world. Similarly, 90 per cent of 14,000 different species of plants in Madagascar are endemic to the island. As the largest island in the Indian Ocean, Madagascar boasts huge swathes of virtually uninhabited land for you to explore.

The largest island of Canada, Baffin Island is located in the Nunavut territory. Located in the Arctic archipelago, it’s the fifth-largest island in the world and is known for its many fjords and freshwater lakes. As most of the island lies north of the Arctic Circle, it receives extremely cold weather with an annual average temperature of -8 degrees Celsius. It offers stunning wild and expansive landscapes along with breathtaking views from the peaks of Mount Asgard and Mount Thor. The island is also home to a large number of mammals, such as polar bears, Arctic wolves and lemmings.

The second-largest island in Indonesia and sixth in the list of the world’s biggest islands, Sumatra is located west of Java and south of the Malay Peninsula in northeast Indian Ocean. Straddling the equator, the island is prone to powerful earthquakes and tsunamis because it is positioned at the subduction zone of Indo-Australian and Eurasian tectonic plates. The island is known for its rugged tropical terrain, endangered wildlife, smouldering volcanoes and rich forests. This is where you can catch a glimpse of some critically endangered species, such as the Sumatran tiger, the Sumatran orangutan, the Sumatran rhinoceros and Sumatran ground-cuckoo, while the picturesque beaches and clear barrels of surf will lure you down to the sea.

Situated between the Pacific Ocean and the Sea of Japan, Honshu Island is considered to be part of Japan’s mainland. It is also the largest of the four islands of Japan, and home to some of the country’s major cities and cultural sites. Among the largest islands in the world, Honshu is the most populated and (and densely so) in the world. On the east coast lies the Japanese capital and megacity Tokyo, which itself is home to nearly 38 million residents. Lying southwest of Tokyo is the iconic, snow-capped volcano Mount Fuji, as well as its largest lake, Lake Biwa. Don’t forget to visit the city of Kyoto (situated at the centre of the island) known for its Zen temples, gardens lined with cherry blossoms, and traditional geisha.

The second-largest island in the Canadian Arctic Archipelago, Victoria is the largest island in the world to lie entirely within the Arctic Circle. Straddling the boundary between the Nunavut and the Northwest territories of Canada, this fascinating island the size of England and Scotland combined, but it is only the second largest island in the Canadian Arctic. It also contains the world’s largest island within an island, within another island—Canada’s very own tiny “sub-sub-sub-island”. Catch this nameless island that lolls across the centre of a small lake, which itself is encapsulated by a slightly larger island, which further resides inside one of a series of long lakes located 75 miles inland from the southern coast of Victoria Island. It was discovered by the Arctic explorer Thomas Simpson in 1838 and holds a population less than 2,000. Get a glimpse of tens of thousands of caribou and musk-ox, both endemic to Canada.

Located in the northwest of the European continent, Great Britain is the ninth-largest in the world and the largest island in the United Kingdom. This island is the biggest island in Europe and is separated from the European mainland by the English Channel and the North Sea. It is part of the United Kingdom and comprises the autonomous regions of England, Scotland and Wales. The long history of this island can be seen through its prehistoric sites such as Neolithic Stonehenge, and medieval castles like those at Warwick, Dover and Caernarfon. Surrounded by 1,000 islands and islets, Great Britain is the most populous region in Europe. Visit it for its rolling hills, craggy coastlines, quaint villages and cream teas.

The tenth-largest island in the world and the third largest island in Canada, Ellesmere is considered part of the Queen Elizabeth Islands. It lies within the Canadian Arctic Archipelago and is also a part of the Qikiqtaaluk Region of the Nunavut province of Canada. As most of the island is covered by the Arctic Cordillera mountain system, it is the most mountainous island in the Canadian Arctic Archipelago and therefore, pretty inhospitable for its few human inhabitants. Only 146 people live here, and it wasn’t until 2011 when the first known circumnavigation of the island was completed. Jon Turk and Erik Boomer completed the 2,400 kms-trip by sea kayak which took them 104 days.

Which Of These Largest Islands In The World Do You Want To Visit?

Besides their difference in size, these large islands also differ in geography, climate, flora and fauna. Through this list, we give you the biggest islands in the world, from the urban metropolitan Honshu Island in Japan to the deserted Ellesmere Island in the Arctic Circle. Step out and discover these fantastic destinations that make up the largest islands in the world and tell us about your experiences in the comments below.