What To See In The Core of the Bagan Archaeological Zone: Old Bagan

Old Bagan is the ancient city in central Myanmar which is known to be one of the most famous archaeological sites in South East Asia. Situated southwest of Mandalay, it contains more than 2,000 Buddhist monuments towering over the green plains.

With several of the main temple sites, city walls, a museum, a reconstructed palace, restaurants, a few shops and a cluster of midrange to top-end hotels. This old city is situated right on a bend of the Ayeyarwady River and is known for its holy sites such as: 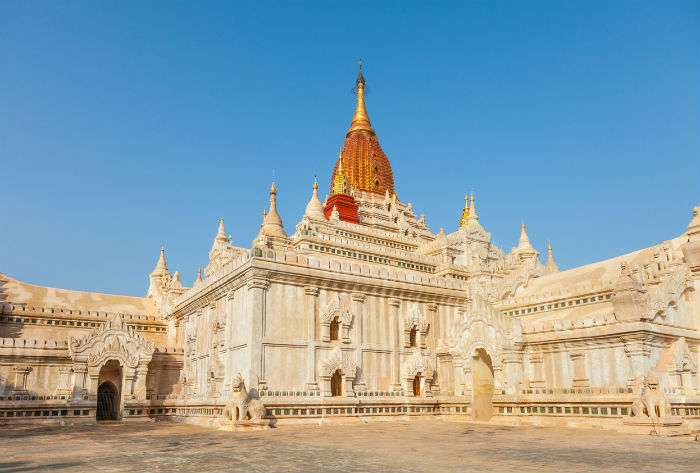 Said to have built between 1090 and 1105, Ananda Pahto Temple was one of the first of Bagan’s great Temples. With its 170ft-high square-based beehive-like sikhara crown and hti umbrella gold shimmering across the plains, Ananda Pahto or Phaya remains to be one of finest, largest, best preserved and most revered of all Bagan temples. This ornate temple is an asymmetrical masterpiece of Mon architectural style and, with some North Indian influence, reflects the transition from the Early to the Middle period of Bagan architecture. While it was heavily damaged in the devastating earthquake of 2016, it is still open to visitors.

Surrounded by an enclosing wall and four integrated arched gateways containing guardian deities, The Ananda sought to reflect the endless wisdom of the Buddha. The entrance ways of the temple make a perfectly proportioned Greek cross, including its vestibules and gabled portico entryways with stupa finials. The base and the terraces of the Ananda are decorated with 554 glazed tiles showing scenes from the Jataka (stories of the Buddha’s past lives) thought to be derived from Mon texts. Therefore, don’t leave without taking a brief walk around the outside of the temple, where you these glazed tiles and lovely views of the spires and terraced roofs.

Nathlaung Kyaung translates to ‘Shrine Confining Nat or Spirits’ and transports us back to a time when King Anawratha tried to banish Nat worship in Bagan. It is said that in this Hindu temple where the King stored non-Buddhist images, particularly ones for local nat, as he tried to enforce Buddhism. Situated Pahtothamya and Thatbyinnyu, this Hindu temple is believed to have been built in 931 by King Taunghthugyi.

The temple is dedicated to the Hindu god Vishnu and is the only Hindu temple remaining in Bagan. In design, it bears a resemblance to the Pyu Leimyethna or four-sided shrines of Sri Keshtra. While the structure was severely damaged in the 1975 earthquake, the main hall and superstructure (with seven original Gupta-style reliefs) still stand.

This Buddhist temple standing 197ft tall is one of the largest and most imposing temples of Bagan. While its construction began under the reign of Narapatisithu, it was finished under the reign of Nantaungmya. The temple’s structure belongs to the style of the hollow gu-style temple where in contrast to the stupas, the hollow gu-style structure is used for meditation, devotional worship of the Buddha and other Buddhist rituals. The temple’s name means ‘Platform to which Homage Is Paid’ and is the crowning achievement of the late Bagan period. While the temple was heavily damaged during the 1975 earthquake as it stands near the site of the quake’s epicentre, it went through some heavy duty reconstruction in following years.

In the ancient city of Bagan, near the Gawdawt Palin Pagoda, you’ll find this government-run museum which features ancient stone inscriptions, original images and mural re-creations collected from the Bagan area and an unexpected room of modern-art renderings of the temples.

With some 850 artefacts, the Museum has 10 exhibition rooms. Out of these, one of the attractions includes a room of  55 kinds of women’s hair knots (and five men’s hairstyles), models of major temples with architectural details, and a model of an 11th-century village. 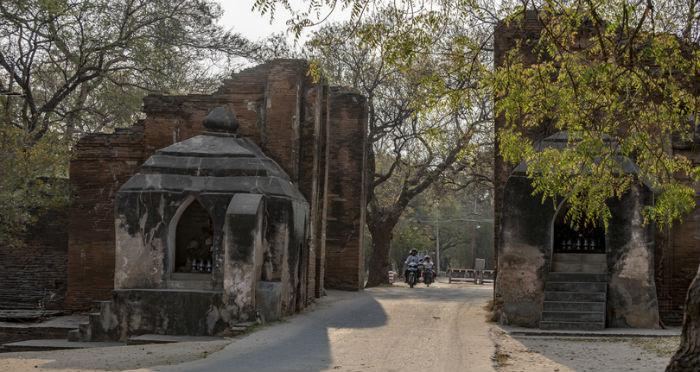 Used to be the main gateway to the ancient Bagan city, Tharabar Gate is the only structure left of the old city built by King Pyinbya. Built-in 849 A.D during the 9th century, this eastern gate used to feature 12 gates originally. The north and the western part of the wall were washed away by the river. Tharabar is derived from the Pali term “Sarabhanga” meaning “shielded against arrows”. Despite the fact that most of the structure was ruined you can still see the traces of old stucco carvings on the arched gateway.

On either side of the gate are two niches, home not to Buddha images but to nat (spirit beings) who guard the gate and are treated with profound respect by locals. On the left side is the brother “Lord of the Great Mountain” and on the right side is the sister “Golden face”. 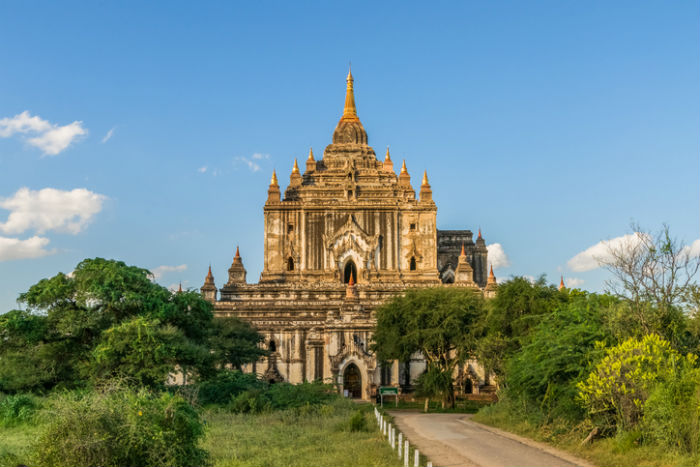 Thatbyinnyu (or That-byin-nyu, “the Omniscient”) Pahto is Bagan’s highest temple is built of two white-coloured boxy storeys, each with three diminishing terraces rimmed with spires and leading to a gold-tipped sikhara, 207ft high. Built-in 1144 by Alaungsithu, the temple is located just inside the south-eastern corner of the old city wall.

As the temple was constructed during one of the high points of Bagan political power and during a period of re-dedication to Theravada Buddhism and religious scholarship, one can see the reflection of era’s innovative architectural and artistic creativity. With its monumental size and looming height, it is a classic example of Bagan’s middle period. 1975 earthquake caused severe damage to the structure. It was mostly repaired by 1979, and the structure was further strengthened in the early 1990s. 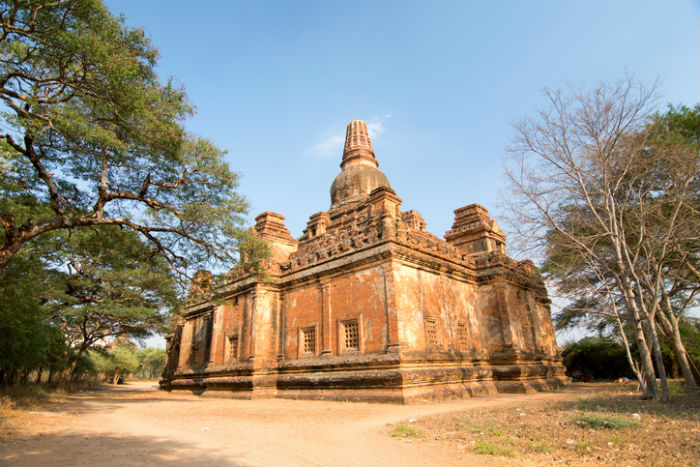 Just 500ft east towards the dominating Thatbyinnyu, you’ll find: Pahtothamya (or Thamya Pahto) Temple is considered one of the five temples built by the non-historical King Taungthugyi. In its vertical superstructure and reconstructed lotus-bud sikhara (corn-cob-like temple finial), however, the monument is clearly beginning to move forward from the early period. The interior of this single-storey building is dimly lit and typical of the early type of Pyu-influenced temples with their small, perforated stone windows.

The construction of the bell-shaped stupa is entirely different from the other stupas where the main body has 12 angles. Originally, at the bases of the angles there used to be Nagar’s heads. Upon the main body is the relic chamber on top of which are concentric rings of plaster mouldings which were damaged during the 1975 earthquake. However, they were restored by the Archaeology Department wherein each of the four walls was installed five perforated brick windows. 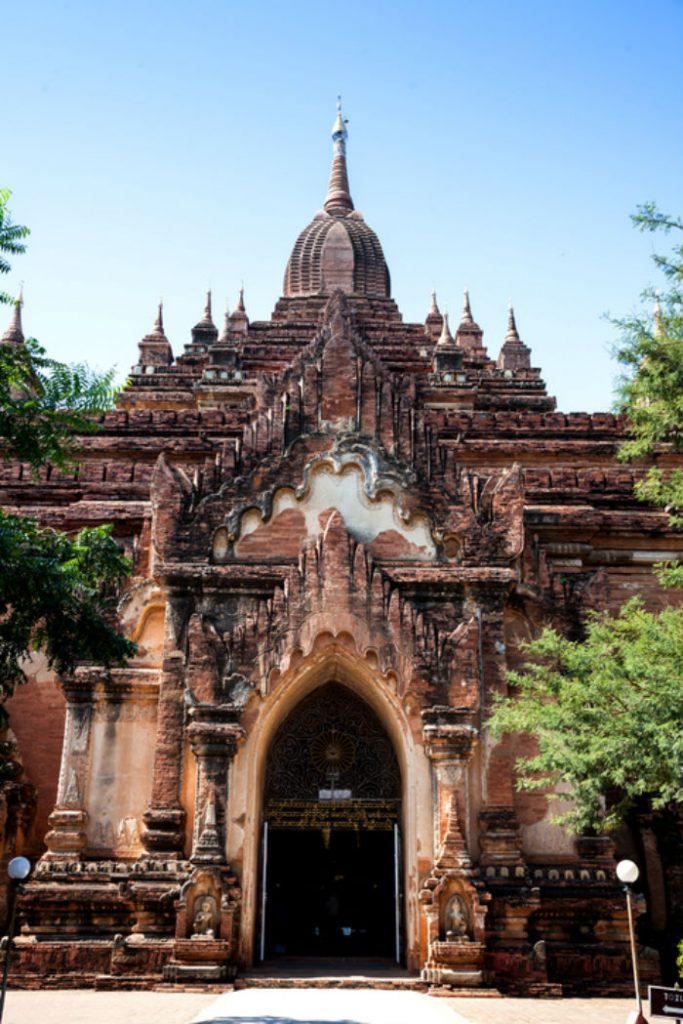 Shwegugyi (or Shwe-gu-gyi, “Great Golden Cave”) temple was built by Alaungsithu in 1131 is located just north of Thatbyinnyu. This small but elegant Pahto is a large story temple set on a large and tall (c. 13 feet) platform. It also features three square receding upper terraces with corner spires or stupas at each corner on top of the central block. The temple mirrors the transition period of temple building in ancient Bagan. You can witness a slow change in architectural style to a lighter, airier and more decorated form with a stress on the vertical.

Inside the temple, you can find fine stucco carvings a teak Buddha and stone slabs that retell (in Pali) its history. This bright interior that this temple is famous for was

So go and explore all the archaeological sites in Old Bagan and do let us know about your experiences in the comment section below!