A Travel Guide To The “Charm City”: Baltimore

The largest city in the state of Maryland, in the Mid-Atlantic region of the USA, Baltimore is a popular tourist destination. Baltimore is an important seaport town and is also a major centre for tourism and travel. You can visit the world-famous Disney-fied Inner Harbour; renowned museums and attractions; award-winning restaurants; a locally loved music scene, and hip and historic neighbourhoods or even explore the shores of Fort McHenry, the birthplace of America’s national anthem, ‘The Star-Spangled Banner.’

Also Read: A Travel Guide To “America In Miniature”: Maryland

While the local culture and hometown sports, remains the part of the Baltimore appeal, the city lives up to its nickname: ‘Charm City’. 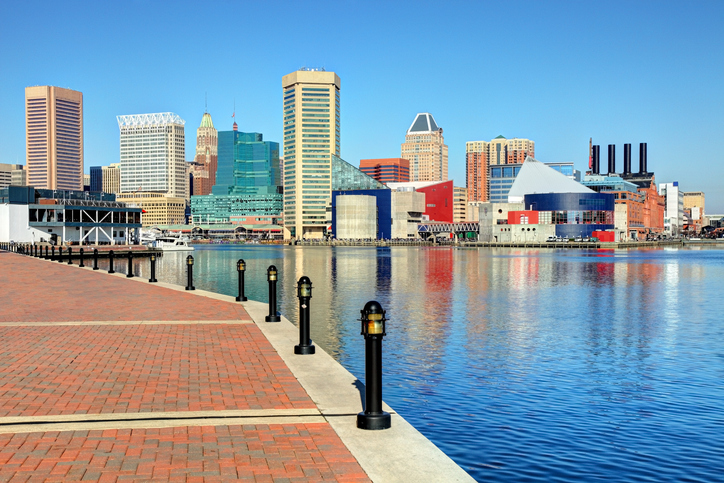 Shuttles also connect BWI to an Amtrak train station just off the airport grounds. The Light Rail into the city from the Airport is just for about two dollars, but it is considerably slower than the MARC or Amtrak trains.

Buses are an affordable way to get to Baltimore if you are already in the Eastern Seaboard, especially if you are coming from New York or Philadelphia. You can reach the main transportation hub in Baltimore: Baltimore Pennsylvania Station (commonly called Penn Station) with the following transit lines: Bus: 51, 95, CITYLINK GREEN, PURPLE.

Baltimore is only a 45-minute drive from D.C. and about an hour and a half drive from Philadelphia. But do remember that car parking is expensive in the inner city and the traffic can be slow in the centre of the city at rush hour (and especially on game days).

Amtrak offers frequent services into Baltimore. On Amtrak, you can get from D.C. to Baltimore in 40 minutes and from Philadelphia to Baltimore in an hour. Tickets can be purchased at the Amtrak QuickTrak machines at the BWI station. The Penn Station is on Charles Street in Midtown—a considerable distance from the harbour area. However, the light rail system connects to the train station, and you can ride it to the convention centre, three blocks from the harbour. Baltimore’s Penn Station serves more than 932,800 guests each year and is easily accessible by I-95, I-83 and I-70. Amtrak offers special group fares as well.

You can pick the MARC train if you’re coming from D.C. as well. The MARC train system provides inexpensive service between Baltimore and Washington, D.C. (and from Washington to Frederick, Maryland and Martinsburg, West Virginia. MARC trains operate through the Penn Station (designated the “Penn line” on MARC schedules) and through a station at Camden Yards (the “Camden line”), near the Inner Harbour.

The Maryland Transit Administration (MTA) operates bus, Metro Subway, Light Rail and MARC train services, making public transportation in Baltimore is nothing less than spectacular. You can buy the pass from any bus operator or vending machine at subway/light rail stations. To get around Baltimore on the cheap by public transport, especially outside of the harbour area, the MTA buses are the way to go. It puts out very handy interactive maps of the downtown and regional bus routes, so you can plan ahead.

As a general rule, the light rail system is considered far more useful for getting into the city than getting around it. You may wish to park outside the city (for free!) and take the light rail in. The subway does not pass many tourist destinations and is mostly used by commuters.

The recently-launched free, hybrid bus service: the Charm City Circulator originates in Downtown towards other Baltimore neighbourhoods. It features four routes that intersect in downtown Baltimore and connect to other transit such as harbour and historic sites; thereby proving to be very useful for visitors and tourists.

One of the most popular (and unique!) modes of transportation in Baltimore is the water taxi system. Rarely a useful mode of transport for everyday life, it is an especially nice way of touring the city’s main sights and admiring the skyline from the water.

Things to See In Baltimore 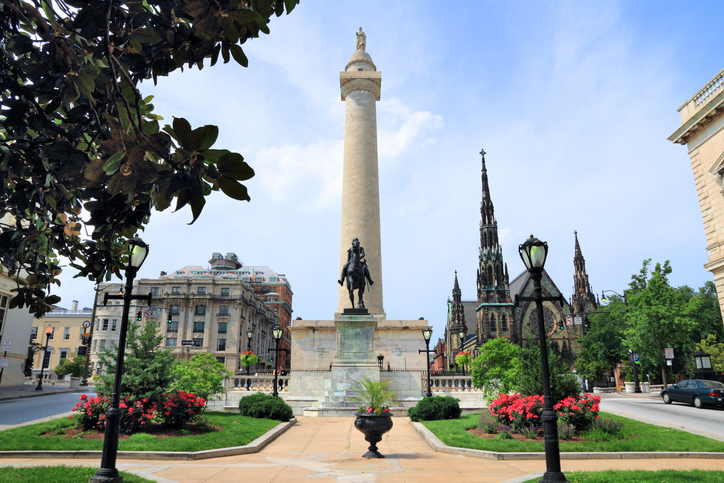 While you won’t run out of places to see in Baltimore, here are few that you shouldn’t miss:

Don’t miss this excellent, eclectic museum covers more than 55 centuries, from ancient to contemporary, with top-notch displays of Asian treasures, rare and ornate manuscripts and books, and a comprehensive French paintings collection.

Located in the Inner Harbour area of downtown Baltimore, this museum stands seven stories high and capped by a glass pyramid. It has almost 20,000 creatures from more than 700 species including Blacktip Reef, a rooftop rainforest and a multi-storey shark tank and. It is a world-class fun and educational visit for everyone.

The magnificent Chamber of Art & Wonders re-creates the Walters’ prodigious collection of more than 30,000 artworks which covers the human history of over 5,500 years, from the 3rd millennium BC to the early 20th century.

178ft-tall Doric column, the Washington Monument is dedicated to America’s founding father, George Washington. Climb the 227 steps, to the top of the monument and you will be blessed with the best views of Baltimore city and points beyond.

Visit the Four ships and a lighthouse that are all National Historic Landmarks of USA. This museum was created as a result of the merger of the USS Constellation Museum and the Baltimore Maritime Museum as a testament to the city’s nautical history and contributions.

This star-shaped brick fort gained iconic status in American history by successfully defending the Baltimore harbour from the British naval bombardment in the War of 1812. Also, during this time Sir Francis Scott Key was inspired by the tattered but still waving American flag on the fort to write the poem, the Star-Spangled Banner- which that would later become the national anthem.

Located east of downtown Baltimore, is a historic waterfront neighbourhood of Fell’s Point. This lively district was established around 1763 and is Baltimore’s top tourist reference for drinking and nightlife.

This unconventional Art Museum near Johns Hopkins University has works of local artists hanging amid the museum’s stately columns and pristine walls as well as open-hours workshops where community members teach.

Take a walk on the wild side and pay a visit to America’s third-oldest zoo: Maryland Zoo in Baltimore. It has more than 2,000 animals including giraffes, penguins and chimpanzees.

Located at the end of Inner Harbour, the Maryland Science Centre is a 200-year-old scientific institution and is known to be one of the oldest in the United States. It provides visitors with an interactive voyage into science.

Built-in neo-classical style, the Basilica of the Assumption was opened in 1821. It is the oldest Roman Catholic cathedral in the United States and was designed by Benjamin Latrobe.

Lying on the juncture of the Chesapeake Bay, Baltimore is blessed with a temperate climate almost all year round. The best time to visit Baltimore weather-wise will be during spring and fall i.e. through March-April and October-November. Spring and fall usher in milder temperatures, pleasant at 54 to 58 degrees Fahrenheit.

Also Read: A Travel Guide To “America In Miniature” – Maryland

Seafood dominates the food scene in Baltimore. Crabs, in particular, are especially popular here. Baltimore food is as quirky as the city itself, influenced by its working-class culture and its location: on the Chesapeake Bay. The city has a wide variety of dining options, but no visit to Maryland is complete without sampling the local favourites: Steamed blue crabs, Pit Beef Sandwich, Lake Trout, Raw Oysters, Maryland Crab Cakes and Maryland Crab Soup.