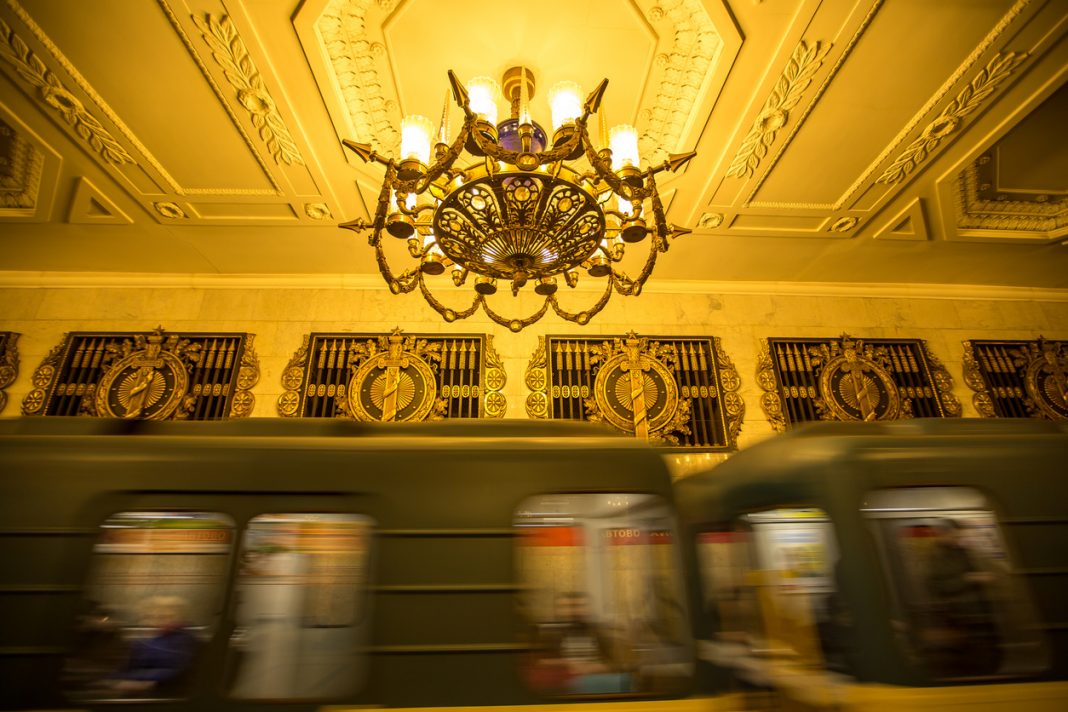 Usually, public transportation like metro isn’t a preferred due to the stations being dark, dingy and grimy places. Traditionally metro stations are neither the cleanest nor safest mode of transportation but still, there are some metro stations from around the globe that can rival art galleries or even museums.

Here’s a list of some of the world’s most beautiful metro stations from around the globe. Catching a ride here will light up your trip to these places in a completely new way. You’ll get commute in a public ride while enjoying these unbelievably breathtaking sights.

Treat yourself with the magnificence and the mystery of Moscow with Komsomolskaya station’s baroque-style decor, historical mosaics and chandeliered ceilings that resemble like a grand ballroom.

The structure features marble walls with golden mosaics which were inspired by an infamous wartime speech by Stalin.

If you are into science fiction, I believe you will love this metro station!

It was designed by Ingo Mauer and includes 11 large concave lamps that fill the space with their enchanting lights.

Located on Kutuzovsky Prospekt Street, this is another opulent station in Moscow, Russia. Reminiscing Parisian Metro, the art is inspired by the works of famous French architect Hector Guimard, Slavyansky Bulvar Metro, and therefore has peculiarly decorated metal trees, branches, and leaves.

There are approximately 90 metro stations in Stockholm have been decorated with sculptures, mosaics, paintings, and installations by artists. One of them is T-Centralen which is also known as the “Blue Platform” where all three lines of Stockholm’s underground meet. Decorated with floral and botanical motifs, this station will surely take you to a whole new world of BLUE.

Enjoy this visual spectacle that features designs based around themes of light and water. At 50 meters, it one of the deepest stations in Naples where you get to admire the underground station lit by Robert Wilson’s ‘The Light Panels’.

Another favourite among the Stockholm metro stations would be Kungsträdgården station which houses the relics that date back to Makalös palace and also features an impressive industrial-looking design. In contrast to T-Centralen, Kungsträdgården is green.

This station feels like walking into an old-time brass submarine. Designed by a Belgian comic artist François Schuiten its walls are lined with riveted copper, as well as huge gears hanging from the ceiling. The entire scene is created based on the fiction works of Jules Verne, so get ready to be transported to a room full of inventions and oddities from the 18th and 19th centuries.

Also Read: Can You Follow The Itinerary of Around the World in 80 Days?

Another iconic metro station in Stockholm is Rådhuset brings the colour deep red, dramatically lit into the metro station. Paired with the exposed bedrock, it certainly makes for impressive photos.

Known as the Dome of Light which is dubbed to be the largest glass work in the world, this station gets kaleidoscope effects that one can simply not miss. The dome is made up of 4,500 glass panels and is designed by an Italian artist Narcissus Quagliata. With a diameter of 30 metres, it also covers an area of 2,180 square metres. While the themes for this art are water, earth, light and fire, the artist’s overall message is love and tolerance.

Situated in the southwestern part of the city, Avtovo station has grand columns and marble interior. There are crystal chandeliers located at the centre of the walking areas and on the station platforms, as well as ornaments decorated with laurel branches, marble columns, imperial mosaics, and lots of historical memorials. Commuters might begin to wonder if they’ve entered a palace or public transport.

Also Read: 18 Of The Best Things To Do In St Petersburg, Russia

City hall station was first opened on October 27, 1904, but was eventually closed in 1945 due to a lot of reasons. This old and unused station is still a marvel to look at—with its emerald green Art Deco tiling, gracefully vaulted ceilings, and ornate skylights.

The station flaunts its whimsically colourful space that holds its own as a modern work of art. Situated on the Red Line of the Lisbon Metro, this gorgeous station was built in 1998 to help transport 11 million visitors to Lisbon’s World Expo.

Be transported by the iconic beauty and great architectural achievements of this iconic American station. The symbol of New York’s past and present, it also holds the Guinness World Record for the largest railway station by the number of platforms, hosting a total of 45.

Also Read: 22 More Of The Most Beautiful Train Stations Around the World