The Central region of Asia stretches from the Caspian Sea in the west to China in the east; it is bounded by Russia in the north and by Iran and Afghanistan in the South. This region is a diverse land with many ethnic groups, languages, religions and tribes. It contains 5 former Soviet Republics: Kazakhstan, Kyrgyzstan, Tajikistan, Turkmenistan, and Uzbekistan, which are collectively known as ‘THE STANS’.

The region’s coveted position right between Europe and East Asia allowed it to be as the home of the Silk Road. This ancient trading route brought diverse history, culture, language and traditions to this region, making it one of the most robust cultural destinations in the world.  While these countries had been seldom visited, they are slowly gaining popularity for their beautiful wild landscapes and their unexplored history. We give you the reasons why each of these countries in Central Asia needs to be added to your bucket list:

This central Asian country extends from the Caspian Sea in the west to the Altai Mountains at its eastern border with China and Russia. It is known to be economically the most advanced of the ‘stans’. This has been possible only because of the abundant reserves of oil and most valuable minerals found in this country.

The world’s 9th biggest country in size, Kazakhstan is the richest Central Asian country. It is also the world’s largest landlocked country, at 2,724,900 km2, larger than all of Western Europe. The biggest city in the country, Almaty, will surprise you with its Europe-like its leafy avenues, chic ALZhiR Museum-Memorial Complex, glossy shopping centres and hedonistic nightlife.

But beyond the fancy cities, the endless featureless steppe in Kazakhstan calls your adventurous spirit with whether hiking in the high mountains, searching for wildlife, enjoying homespun hospitality in village guesthouses, or jolting across the western deserts to remote underground mosques.

Best Time to Visit: With its unique geography, Kazakhstan gets too hot during summer and too cold during winter. Therefore the best time to experience the beauty of the steppes and the mountains in this central Asian country would be between July – August. During this time, the weather is perfect throughout the country and as it is the peak season, it’s also the best time for hiking.

Another landlocked and mountainous Central Asian country, Kyrgyzstan is known for its incredible natural beauty and proud nomadic traditions. Immerse yourself in these nomadic cultures with their new homestays and yurt stays.

A paradise for hikers, trekkers’ climbers and riders as one gets to feast his/her eyes on the unspoilt mountain-scapes, stark craggy ridges and rolling jailoos (summer pastures). The simple and quiet life of the countryside will surely charm you with it’s as a wild untouched beauty that is rarely found anywhere else around the world. Other than its breath-taking scenery, Kyrgyzstan has warm welcoming people, adventures such as trekking, horse trekking, and scenic drives, but most of all, this central Asian country is easy on the pocket. You’ll find many budget tours with interesting sightseeing from locations; Bishkek, Karakol, Jety-Oguz, Bokombaevo, Kochkor to Song-Kol.

Best Time to Visit: Situated right at the heart of Central Asia, Kyrgyzstan’s usual climate is hot, dry summers and bitterly cold winters. So, the ideal time to visit the country will be July and August. During this time, the weather is warm and that the summer pasture is full of yurts and ripe fruits and vegetables. You’ll find the country bazaars to be liveliest during this time and you can also explore the country’s mountainous areas and hiking trails. 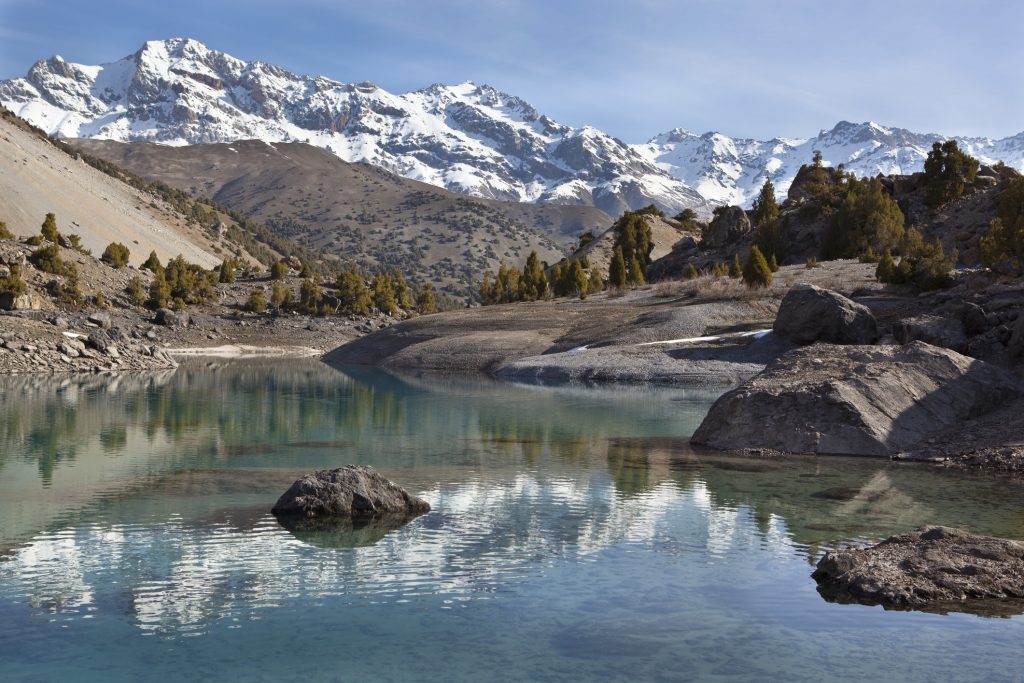 The smallest Central Asian country, Tajikistan is a landlocked and highly mountainous region. With more than 90% of its region being mountainous– multi-hued lakes, peaks and high passes are perfect for hikers and trekkers!

Travel to the only non-Turk country of central Asia for its mountainous landscape, less explored cultures and its scattered villages.  Also known as the ‘The Roof Of the World’, this Old Persian nation is perfect for adventure junkies. Don’t forget to visit the Silk Road gems like Khujand and Istaravshan, the stunning, untouched mountain scenery of the Pamirs and the gleaming lakes.

One of the Central Asian countries, did you know that Turkmenistan is 70% desert? Yes, it is home of the vast Karakum Desert. Explore the desert, during your desert walkabouts, which used to be home to a giant sea 30 million years ago.

The mysterious and un-explored Turkmenistan is a perfect blend of Silk Road history and the traditional nomadic culture. This nation is an amalgam of desert moonscapes and arid mountains, dotted with the ruins of great ancient civilizations.

Best Time to Visit: During spring and autumn season (mid-March to the end of May and then again from mid-September to November).  As during this time, the heatwave has disappeared, the weather will be pleasant with a brief flush of tender blossoms and green grass colours all over the country.

A true enigma of Central Asia will lure you in with its mosques, mausoleums, madrasas and other sites linked to the Silk Road, the ancient trade route between China and the Mediterranean.

Rich in history you’ll find three of the Silk route’s most important cities in Uzbekistan- Khiva, Bukhara and Samarkand, and other old Silk Road citadels. These cities were key stopovers for traders, and have now been meticulously restored to their former glory. Due to this refurbishment, you’ll find a charming mixture of 12th-century mosques and classical Russian architecture. Apart from the region’s rich culture and history which is more than two millennia old, the country is also known for its warm and friendly hospitality. So plan your next trip to see the country’s Aral Sea, the fortresses of remote Karakalpakstan, the booming capital Tashkent and the ecotourism opportunities of the Nuratau Mountains.

Best Time to Visit: Another central Asian country with a continental climate, the best time to visit Uzbekistan would be during spring (April to May) and autumn (September to early November). During these periods, Uzbekistan is typically warm and dry, and you can enjoy the heat of this desert without it being uncomfortably hot, like during the summer months.

Plan your next trip to Central Asia and let us know about your experiences in the comments below!