If you’re like me, you have a really long list of places you want to visit. But you don’t know where to start. Why not cover the ultimate bucket list, and visit the seven wonders of the world. The ‘New7Wonders‘ were voted on by over 100 million people in 2007, the latest among a series of lists compiled throughout history.

These wonders are located across various countries and continents and serve as a perfect jumping off point for wider travel in the areas around it. The Seven Wonders are listed here in no particular order: 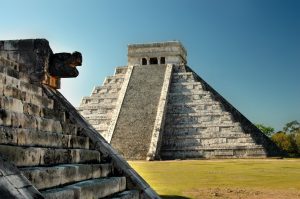 Chichen Itza in the Yucatan Peninsula displays the power and knowledge of the ancient Mayan culture. Once a trading center for cloth, slaves, honey, and salt, this city is now in ruins. It flourished between 800 to 1200AD, when it was both the political and the economic hub of the Mayan Civilization. The most famous ruin is El Caracol, which is said to have been a sophisticated astronomical observatory. 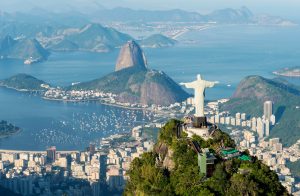 The massive statue has been towering over Rio since 1931. The 130-foot tall art-deco structure was designed by Hector da Silva Costa. Though it cost over $250,000 to build, much of it was funded through donations. Perched on Corcouado Mountain, this awe-inspiring concrete and soapstone statue has become iconic for both Rio, and Brazil. 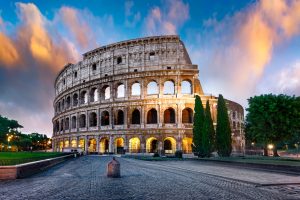 Built between 70 and 80 AD, the Colosseum is one of the most iconic sights of both Rome and the Roman Empire. It was in use for almost 500 years for gladiatorial matches, executions, battle reenactments, and other public spectacles. The oval structure seats over 50,000 spectators and is the largest amphitheater ever built. Its design continues to influence amphitheaters today. Though it is now in ruins, thanks to earthquakes and stone-robbers, most of it remains open to visitors. 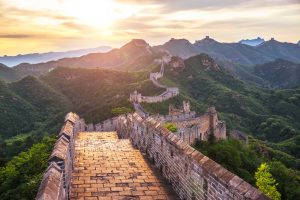 This stone and earth fortification was begun in the 5th century BC. Taking almost a thousand years to complete, it was built and maintained by various dynasties. It was primarily constructed to protect the Chinese Empire from invading Mongols. It is actually a succession of wall and fortifications spanning approximately 6400 km. This makes it the longest man-made structure in the world. 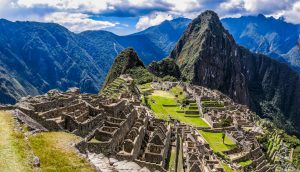 This magnificent Incan city is set between two towering peaks in the Andes. Machu Picchu is thought by scholars to have been built to play on astronomical elements. Built in the 15th century, and later abandoned, it is famous for its sparkling granite walls, erected without mortar, and its spectacular views. The citadel can be reached by foot, train, and helicopter. 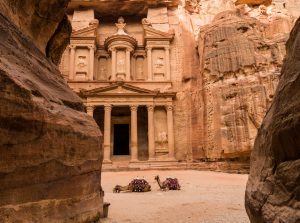 Once the capital of the Nabataean Empire of King Aretas, Petra was at the height of its use from 9 BC to 40 AD. A number of incredible structures can be seen carved int the spectacular red stone. These include a 4000 seat amphitheater, and and the El Deir monastery. The intricate tunnels and water chambers show the enormous sophistication of the Nabataean people. 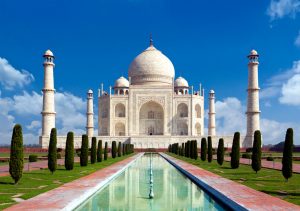 This ivory-white marble mausoleum was commissioned by Mughal Emperor Shah Jahan for his wife Mumtaz Mahal. Built between 1632 and 1648, this outstanding example of Muslim architecture is often called a monument to enduring love. Standing on the banks of the Yamuna River in Agra, the Taj Mahal complex includes stunning formal gardens, raised pathways, sunken flower beds, and the iconic reflecting pool. This marvel glows in the golden rays of dawn and dusk, but in the moonlight, it shines like a luminescent pearl. 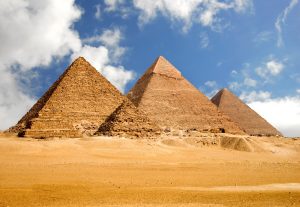 As a bonus, see the only remaining wonder of the Ancient World, and an honorary New7Wonder, the breathtaking Pyramids of Giza. Constructed by Pharaohs Khufu, Khafre, and Menkaure between 2550 to 2490 BC, they were built to last for eternity. These Egyptian pharaohs believed that they would become gods in the afterlife, and filled these pyramids with everything they would need for their lives there. From treasures, foods, furniture, and even toy servants, they expected to live in luxury. The pyramid complex also includes the statue of the Sphinx, several cemeteries, a workers’ village and many palaces.