We landed in Athens International Airport after a brief flight from Sabiha Gokcen airport, Istanbul. From there we took a bus to Igoumenitsa to take the ferry across the Ionian Sea to the island of Corfu.

We loaded our stuff onto the ferry and it was Onward Ho to Corfu…the choppy sea and chilly winds made us don our jackets and caps…sipping cappuccino, nice! The sea is clear and aquamarine in the literal sense of the colour. It was icy and my fingers were freezing, but stand on the deck I did! I wasn’t going to miss out on any of the amazing scenery. 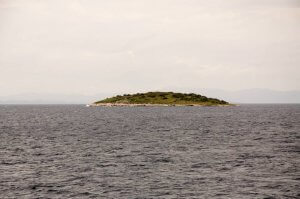 The island is bound with the history of Greece from the beginning of Greek mythology. Its Greek name, Kerkyra or Korkyra, is related to two powerful water symbols: Poseidon, God of the sea, and Asopos, an important Greek mainland river. Based on the myth Poseidon fell in love with Korkyra – a beautiful nymph, who happened to be the daughter of Asopus and Metope the river nymph. He abducted her and brought her to the hitherto unnamed island. In a state of marital bliss he named the island after her: which gradually evolved to Kerkyra (Doric). Soon after, a child whom they named Phaiax was born to them. The inhabitants of the island – Phaiakes – were named after him. The term Phaiakes was transliterated via Latin to Phaeacians. Therefore, Corfu’s nickname is The island of the Phaeacians.

We reached Corfu in about 2 hours, docked at a small pier and boarded our bus to go to Messonghi Beach Resort. On our way to the resort we saw green fields all around, and trees laden with lemons, oranges, and olives – all ripe for picking. It was like travelling through a dream garden. We reached our resort and were rewarded with a fabulous view of the sea from our room. I haven’t seen such a huge resort ever – took me 15 mins to walk to the main gate from my room which was bang on the beach! All we did was eat, drink and relax. We drank endless cups of cappuccino, sunned on the benches, dipped our toes in the icy water and napped.

Gerald Durrell, who spent his childhood in this beautiful island, wrote some well-loved books including My Family and Other Animals, Beasts in my Belfry, A Zoo in my Luggage etc, based on his stay there. Part of my excitement was that I could walk the streets where he once ambled am sure.

We were there for the Hellenic Cricket Cup – schools from various countries were part of this tournament. So cricket we did watch – sitting on the side of the grounds and enjoying the sport.

Greek food is very meaty – let me explain. Every dish has meat in it! Be it minced, small bite sized pieces, or the whole leg of chicken or mutton! They eat a lot of lentils as well. Brinjal and potatoes abound. For me just looking at the food made me feel fat! Rich and aromatic, you are transported into foodie heaven. So many cheeses to choose from. Some mornings, I just ate tomatoes, cucumber, black and green olives, crusty warm bread and a selection of cheese.

We feasted on roast chicken, Greek salad (the Feta cheese just fills your senses with its tart and fresh taste) Souvlaki, Moussaka, Baklava, Gyros, drank Ouzo till it made us dizzy..walked a lot to ensure we didn’t add to the already expanding girth! In the first few days, we ate, then decided to go on a diet…then just figured we should eat and make merry and worry about exercising at a later date!

We did our share of sightseeing. Old town Corfu with its quaint Venetian fac 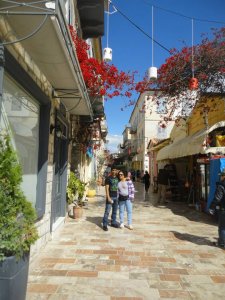 ades. The town square with numerous cafes around it. Souvenir shops where fridge magnets were bought. One day we hired a scooter and rode around. There is a road that runs around the whole island. Numerous pit stops were made to snack and drink coffee and enjoy the scenery. My son rode a regular bicycle but then he is way more fit that either me or the husband! We also rode up into the hills. Stole some lemons and oranges from a garden – it honestly looked untended and the house was most definitely abandoned.

One evening we were treated to some Greek song and dance. The theme song from Zorba the Greek played and the men and women did the traditional Greek dance. Foot tapping and lively, we thoroughly enjoyed it. Some of us got pulled in to dance with them. I needed no second invitation.

Our resort had a great night club. We sauntered there one night after dinner and it was completely deserted @11.30 pm. Thought we had the day wrong so enquired with the lone person at Reception as to which days the club was open. He laughed and said daily – but it only gets going after midnight! Huh!! That night I decided it was better to grab some beauty sleep but the next day I hit the floor dancing and had such a blast. Jived with the Ambassador of South Africa (no less) and did a couple of steps with the Indian Ambassador as well. They were there for the Hellenic Cup cricket games.

A Travel Guide To Crete’s Many Wonderful And Astonishing Sights